She added non-toxic flavourings and essence to create a distinct scent in each piece of dough.

The 24-year-old Nanyang Technological University (NTU) art and design student's concoctions are not meant to be eaten.

They are part of her project to create games for senior inpatients with dementia at Ng Teng Fong General Hospital. Her idea is to make dough with scents such as mango, cinnamon and rose for the patients to identify and associate with events in their past.

The dough balls can also be moulded into various shapes.

Ms Goh is one of three students from NTU's School of Art, Design and Media who were involved in the 10-month project.

They were led by Assistant Professor Michael Tan Koon Boon, who specialises in arts and design for health and well-being.

My grandfather's memory is not good, so it inspired me to create things for him and people like him.

MS CASSANDRA SEAH, an NTU undergrad, on her sense of fulfilment when the patients tried out her game of boxes. 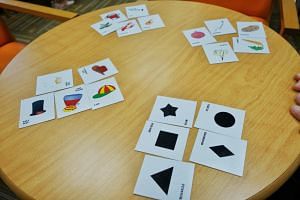 Games help patients not to forget to remember

He said: "It is about creating a new sphere for design, where students think about the social value of their projects.

"They see how the patients respond to their work and this gives them a real sense of how their ideas can take off."

For Ms Goh, the process was harder than she thought. "I realised the dough had to be the perfect consistency to be moulded. I also found that fruit scents might be easier to identify than cinnamon."

Her work paid off when the patients picked up the dough and, with bright smiles, identified the flavours and shaped them into objects such as stars.

Ms Goh said: "I'm so pleased that the patients took to the dough balls. It's satisfying to know that they are enjoying the games."

Fellow undergraduate Khaw June Ming, 22, created a game for patients to use geometric blocks to create the animals from the Chinese zodiac. She said: "This game lets patients express their creativity and empowers them to have control over what they create."

Ms Cassandra Seah, 23, also felt a sense of fulfilment when the patients tried out her creation, which consists of 24 boxes with different textures inside.

"My grandfather's memory is not good, so it inspired me to create things for him and people like him," she said.

A version of this article appeared in the print edition of The Straits Times on October 10, 2017, with the headline 'Creating fun and games to stir up memories'. Subscribe
Topics:
More
Whatsapp Linkedin FB Messenger Telegram Reddit WeChat Pinterest Print Purchase Article Copy permalink