Someone squealed excitedly across the room because she had just got her hands on a picture of a cheongsam, ready to be coloured in.

Next to her, another person recognised all the Mandarin phrases in a crossword puzzle and circled them furiously. Others, who were a little lost, peeped over their neighbours' shoulders to sneak a peek attheir answers.

This scene on Wednesday did not take place in a kindergarten but at NTUC Health's senior activity centre in Henderson.

Similar scenes are also playing out at other eldercare centres in Singapore, as caregivers engage elderly residents with exercises commonly associated with children, in a bid to keep their minds active and the dementia scourge at bay.

The activity books for the elderly - with connect-the-dots exercises, crossword puzzles, spot-the-difference challenges or colouring segments - are themed after culturally relevant motifs from the past so as to evoke personal memories.

At least two initiatives here have begun developing local resources to engage the seniors, especially those with dementia.

The book is good because it challenges them to think and the local references, such as 'bak chang' (dumplings), are starting points for them to talk about their past.

MR CALVIN TEH, an occupational therapist from Apex Harmony Lodge, on the activity book called My Kueh Lapis. 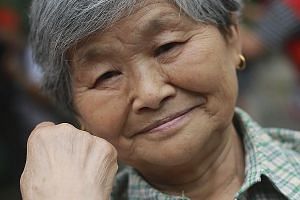 There is no known cure for dementia, or any evidence that exercising the brain in different ways can delay the onset of Alzheimer's.

But such activities are seen as useful by many experts, as reminisce therapy (thinking and talking about the past) and cognitive stimulation can improve the overall health and quality of life of the elderly.

Today, one in 10 people here aged 60 and above is diagnosed with dementia. It affects about 40,000 people in Singapore, and the number is expected to double by 2030.

KYDZ International, a company that provides learning resources to schools and other institutions, developed the activity book called My Kueh Lapis for seniors in March. They are now being used by 15 organisations, from daycare centres for the elderly to nursing homes and hospitals, as well as private individuals.

"We decided to come up with it after caregivers told us their elderly folk at home found children's activity books too kiddish and Western-oriented. When they buy activity books available overseas for seniors, the seniors here are not familiar with... terms such as Thanksgiving or Halloween," said Ms Carrie Chan, 52, co-founder of KYDZ.

Occupational therapist Calvin Teh from Apex Harmony Lodge, a nursing home for people with dementia, said they chose to use My Kueh Lapis, which contains 109 pages of activities, over some of the children's books that were used in the past because they did not want to treat their residents like infants.

"The book is good because it challenges them to think and the local references, such as 'bak chang' (dumplings), are starting points for them to talk about their past," said Mr Teh.

Similarly, Ms Christel Goh, 26, designed a card game for seniors to "fight dementia" after witnessing the impact of the disease. Her grandmother shows signs of dementia but has yet to be diagnosed.

There are several ways to play the game, including relying on memory to match cards that have pictures of heritage items, such as clogs or tingkat, and food items, such as kueh tutu.

"My family explored different ways to engage our grandmother, from colouring books to food and exercises, and we have seen positive results in her memory and disposition," said Ms Goh.

She is hoping to raise $6,500 for the game on the crowdfunding platform Indiegogo so that the card packs can be distributed to homes for the elderly.

Ms Wong Heng Mui, centre supervisor at NTUC Health's senior activity centre in Henderson, said she has noticed some improvement in the motor and communication skills of the elderly residents there since the centre started using the My Kueh Lapis book last month.

She said: "I train myself to do this and read the papers every day, so slowly, I started to recognise words."

The Chinese terms for "carrot cake", "bak kut teh" and "hainanese chicken rice" used in the puzzle resonated with her as she was a hawker for most of her life.

Colouring the outline of a Singer brand sewing machine also brought back memories for Madam Helen Fernandez, 78, who has dementia. She used to sew school uniforms, curtains and blouses to sell.

She could tell this reporter the sound her sewing machine used to make. "It went whrrrr, whrrrr, whrrrrr," said Madam Fernandez, the sounds emanating breezily, together with a toothless grin.

• To order the activity book, call 6274-3688. To donate to the card game project, go to https://www.indiegogo.com/projects/fighting-dementia-in-singapore-art#/

A version of this article appeared in the print edition of The Straits Times on June 17, 2017, with the headline 'Back to fun and games to keep dementia at bay'. Subscribe
Topics:
More
Whatsapp Linkedin FB Messenger Telegram Reddit WeChat Pinterest Print Purchase Article Copy permalink