Screening for tuberculosis (TB) among SMRT staff has been stepped up after another SMRT worker was diagnosed with the contagious disease.

Like three other recent cases, the fourth SMRT worker, a train driver, is also from Tanah Merah station. He was warded at Tan Tock Seng Hospital (TTSH) early this week but has since been discharged.

He was found to have active TB, like one of the earlier cases. The other two workers were found to have latent TB, which is not contagious but can develop into active, contagious TB if untreated. All four are receiving medication for the disease.

Another 13 SMRT workers are suspected of having the disease, after they tested positive in the Quanti- Feron test, a TB marker.

A Ministry of Health (MOH) spokesman said: "Those with positive blood test results may not all be cases of active TB, and may not be linked to previous cases." 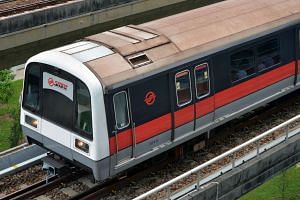 He added that contact tracing is being carried out by TTSH's Tuberculosis Control Unit "to identify close contacts, such as family members and co-workers, so that they undergo TB screening".

SMRT has sent employees for TB screening in batches. The Straits Times understands about 30 have been screened since Wednesday.

The latest TB case comes a month after the first three cases were identified. The MOH spokesman said the worker was contacted earlier by the TB Control Unit for screening but did not turn up.

According to sources, he became severely ill this week.

"He is now undergoing treatment for TB," the MOH spokesman said. "Persons with active TB rapidly become non-infectious once treatment starts. They can typically return to normal activities after two weeks of treatment."

More SMRT staff may have been infected before these recent cases.

According to MOH, the worker in the latest case was a "close contact of a train driver who was diagnosed with active TB in December 2015".

"We have shared health advisories with our staff... exhorting them to continue practising good personal hygiene," he said, adding that SMRT "will spare no effort in taking the necessary steps to keep our staff and commuters safe".

So far, screening has been confined to staff at the Tanah Merah station, an interchange for trains going to Changi Airport.

Dr Wong Sin Yew, an infectious disease physician at Gleneagles Medical Centre, said he hopes the screening can be completed quickly so that those with active TB can be isolated quickly.

"This is important to prevent ongoing TB transmission of the SMRT workers within Tanah Merah station," he said. "For the latent TB cases, there is time to do more detailed investigations to determine transmission links."

Dr Wong added that the screening could uncover TB cases unrelated to the current ones.

For instance, they could have been "exposed months or years ago, have latent TB but are otherwise healthy".

The MOH said the risk of transmission to people who are not close contacts of a TB patient is "very low".

A version of this article appeared in the print edition of The Straits Times on August 13, 2016, with the headline 'Another SMRT worker found to have TB'. Subscribe
Topics:
More
Whatsapp Linkedin FB Messenger Telegram Reddit WeChat Pinterest Print Purchase Article Copy permalink