When MediShield Life was created two years ago to provide universal medical coverage for all Singaporeans from birth till death, it was meant to give them peace of mind in the face of big hospital bills.

This is so long as they opt for subsidised treatment.

So far, that has worked quite well. People with pre-existing diseases who were previously not covered now enjoy the same coverage as everyone else, although they have to pay higher premiums for 10 years.

What was not planned for was a case like Mr Thomas Lukose's, an unusual incident that serves as an opportunity for MediShield Life to show it is adaptable to deal with anomalies.

Mr Lukose has MediShield Life, which would be enough to cover any big, subsidised hospital bill.

But then he suffered a heart attack on Sept 12 at Gleneagles Hospital while on night shift as a security guard. He needed immediate treatment and was taken to Gleneagles' emergency department.

If it had happened anywhere else, an ambulance would have been called and it would have taken him to the nearest public hospital, where subsidised treatment would be an option.

Mr Lukose's family realised that the MediShield Life and his employer insurance would not be enough to cover the bill of a private surgeon operating at a private hospital, and asked for him to be moved to a public sector facility.

Because of the lack of an intensive care bed which Mr Lukose needed at the National Heart Centre Singapore (NHCS), and more importantly, because his condition was so unstable that moving him was not a viable option, he remained at Gleneagles, where he underwent a triple bypass.

The surgeon, knowing the family's worry about a big bill they could not afford, waived the fee for his service. But it remains huge, with the interim bill coming to almost $80,000.

If he were a C-class patient with full subsidy, Mr Lukose's bill in a public hospital would be only a fraction of that he has incurred.

Mr Lukose's experience highlights a problem that others could face.

What happens if a patient has no choice where he is treated because of situations like an emergency?

Should the Ministry of Health (MOH) provide for a portable subsidy in such cases? That would mean the patient pays what he would have, had he been treated in a public hospital.

Or should MediShield Life cover such cases fully?

Otherwise, how else can people protect themselves against huge hospital bills when the unforeseen happens?

Dr Chia Shi Lu, head of the Government Parliamentary Committee for Health, however, feels that Gleneagles should waive most of the fee. "For the amount not covered by insurance and Medishield Life, perhaps the hospital can consider waiving the remainder on a goodwill basis, particularly as the doctor has already waived his fees and the patient works for the hospital."

Mr Lukose happens to be an employee. What if he is not?

There are more than one million people who, like Mr Lukose, have only the basic insurance coverage with no add-on integrated plan for more expensive hospital treatments.

The incident was not the fault of Mr Lukose or his family. So, the burden of paying the huge bill should not be theirs alone to bear.

It would have been terrible if his family had insisted on moving him to the NHCS in spite of his unstable condition and the doctor's advice. They did the right thing. Unfortunately, they now have to pay heavily for that decision.

Health Minister Gan Kim Yong promised "peace of mind" with MediShield Life, and this is an instance in which the system can show it is able to deal with anomalies, and give families comfort.

The Lukose family should not need to resort to crowdfunding to raise the money to pay his hospital bill. Such incidents should also not be treated on a case-by-case basis, where someone decides whether a helping hand should be extended. 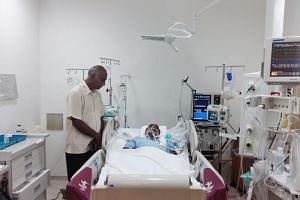 Patient could not get place in SGH, hit with $78k bill

If a patient is unable to get the subsidised care he opts for, for reasons accepted as valid by the public institution, he should be allowed to pay what he would have as a subsidised patient.

This "peace of mind" system should allow for the same insurance coverage he would have been entitled to as a subsidised patient.

The focus should not just be on insurance, but also assurance.

A version of this article appeared in the print edition of The Straits Times on October 11, 2017, with the headline 'Allow subsidised rates for patients who opt for but can't get such care'. Subscribe
Topics:
More
Whatsapp Linkedin FB Messenger Telegram Reddit WeChat Pinterest Print Purchase Article Copy permalink