SINGAPORE - Here's all you need to know about the Zika virus - from the dangers it poses to pregnant women to the steps one can take to minimise risk of exposure.

About the Zika virus and who is at risk

Q: What is the Zika virus?

A: It is a virus infection transmitted by the bite of an infected Aedes mosquito, which also carries the dengue and chikungunya viruses.

It is generally a mild disease; four in five people who become infected with Zika do not show any symptoms but could be infectious.

Q: What are the symptoms?

A: They include a fever, an itchy rash, body aches, headache, red eyes and occasionally, nausea and vomiting. 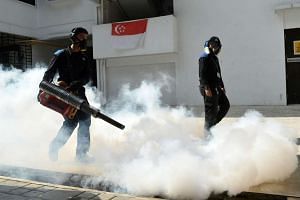 These usually develop within three to 12 days after the mosquito bite and often last between four and seven days.

Q: Who is at greatest risk?

A: Unborn babies are the most at risk should their mothers become infected with the Zika virus.

Between 1 per cent and 10 per cent of women infected during pregnancy give birth to babies with defects. The most common defect is microcephaly, where the baby is born with a much smaller head, sloping forehead and damaged brain.

A: At the moment, there is no cure or vaccine. Only the symptoms can be treated.

To avoid getting infected, use insect repellent and wear clothing that covers the body, arms and legs.

The public are also encouraged to do the five-step mozzie wipeout to prevent mosquitoes from breeding at home. Zika and the link to pregnancy

Q: If a woman is pregnant, does that put her at higher risk of getting infected by Zika?

A: There is currently no evidence that this is so, says the Ministry of Health (MOH). However, the consequences can be more serious if a pregnant woman is infected as her unborn child can get a birth defect known as microcephaly, that is, an abnormally small head.

The risk of microcephaly from a Zika virus infection is still unknown, although some studies have put it at between 1 per cent and 13 per cent. Research is still ongoing.

Q: Is the baby at risk throughout the pregnancy?

A: Associate Professor Arijit Biswas, head of obstetrics and gynaecology at the National University Hospital, says the risk is highest during the first trimester and the early part of the second trimester of pregnancy.

Though the risk is lower in the third trimester, the virus could still cause fatal outcomes such as stillbirth.

Q: If a pregnant woman has Zika, what can be done to prevent its effects on the baby?

A: Dr Derrick Heng, group director for public health at the Health Ministry, says: "Once the mother is infected, there is nothing much that can be done to prevent the effect on the baby."

However, more than nine in 10 pregnant women infected with Zika will deliver normal babies.

Q: At what point can microcephaly be detected in unborn babies?

A: According to the United States Centres for Disease Control and Prevention, microcephaly can be diagnosed through an ultrasound starting from late in the second trimester of pregnancy.

However, it stressed that the accuracy of using ultrasound to detect microcephaly in a baby whose mother has Zika is still unknown. It can depend on many factors, including when the mother was infected and how serious the microcephaly is.

The World Health Organisation (WHO) recommends an ultrasound between 28 and 30 weeks.

Recommendations for pregnant women and their partners

Q: Are there any tests that can be done to determine if a pregnant woman is infected with Zika?

A: Currently, the only reliable test is the reverse transcriptase-polymerase chain reaction (RT-PCR) test, which looks for genetic material of the virus in blood or urine.

However, the test is able to detect Zika infection in blood only within five to seven days of the onset of symptoms, and in urine within 14 days of onset. Therefore, the timeframe in which a pregnant woman can be tested using RT-PCR is very short.

Currently, there is no reliable serological test (which looks for antibodies in the blood) for Zika.

Q: If a women is pregnant and her male partner tests positive for Zika, does she need to get tested if she does not have any symptoms?

A: If she has had sexual intercourse with her partner, she should consult a doctor and inform the doctor of possible exposure to Zika so that he/she can arrange for Zika testing.

Q: If a woman is pregnant and asymptomatic, but worried about possible exposure to Zika, where should she go to get tested?

A: The WHO's May 2016 guidelines and MOH's August 2016 clinical guidelines on Zika virus infection and pregnancy do not recommend routine Zika testing for asymptomatic pregnant women. If they are concerned, they should discuss this further with their doctor.

Q: Should a woman who is pregnant get regular blood/urine tests for Zika, to make sure that she is not infected?

A: No, unless she has symptoms of a possible Zika infection such as fever and rash and other symptoms such as red eyes or joint pain.

Q: Is it safe for pregnant women to use insect repellent?

A: Yes, insect repellents sold in Singapore are safe for use by pregnant women.

They should take steps to prevent mosquito bites and consult a doctor if they develop a fever and rash and other symptoms such as red eyes or joint pain after possible exposure to Zika. They should tell the doctor where they live, work or study.

They can also prevent mosquito bites by wearing long-sleeved clothing and long trousers, and sleeping under mosquito nets or in rooms with wire-mesh screens or in air-conditioned rooms to keep out mosquitoes.

Q: If a woman is pregnant and has recently visited a Zika-affected area in Singapore, what should she do?

A: There is no need to see a doctor if she is well. She should continue to take strict precautions against mosquito bites. If she has symptoms of possible Zika virus infection, she should seek medical attention immediately, and consult her obstetrics and gynaecology (O&G) doctor.

Q: If a woman is pregnant and lives, works or studies in a Zika-affected area in Singapore, what should she do?

A: She should take steps to prevent mosquito bites and consult a doctor if she develops a fever and rash and other symptoms such as red eyes or joint pain after possible exposure to Zika. She should tell the doctor where she lives, works or studies.

Advice for pregnant women/mothers with Zika

Q: What is being done in other countries to manage pregnant women with Zika? Is Singapore doing the same?

A: In countries with community transmission of Zika virus infection and in line with WHO's guidelines, pregnant women with Zika are advised to follow up closely with healthcare practitioners to detect any foetal abnormalities. Singapore has adopted similar recommendations.

Q: If a woman is pregnant and her blood tests positive for Zika, will she need to be hospitalised?

A: Like other patients who test positive for Zika, she should be referred to a hospital and managed by an O&G doctor. 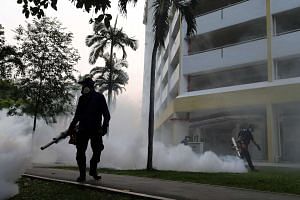 Q: If a woman is pregnant and tests positive for the Zika virus infection, will her baby have microcephaly?

A: Currently, even if a pregnant woman is confirmed to be infected with the Zika virus, there is no test that will predict the future occurrence of microcephaly. She is advised to follow up closely with her doctor.

Q: If a pregnant woman tests positive for Zika virus infection, should she consider termination of pregnancy?

A: A pregnant patient with confirmed Zika infection will be admitted to a public hospital with a referral to an O&G doctor for further management. Serial ultrasounds and amniotic fluid testing may be considered after the potential risks and interpretation of results are discussed.

The termination of pregnancy is a personal choice that should be made carefully by the parents in consultation with their doctor.

Q: Can mothers with Zika infection breastfeed their baby?

A: The Zika virus has been detected in breast milk, but there is currently no evidence that it is transmitted to babies through breastfeeding.

Q: If a woman who is not pregnant is bitten by a mosquito and infected with the Zika virus, will her future pregnancies be at risk?

A: The Zika virus infection does not pose a risk of birth defects for future pregnancies.

Q: If a couple is planning for pregnancy, what is the MOH's advice if either one lives, works or studies in an affected area?

A: If both the man and woman are well, they should take strict precautions against mosquito bites, and if they have further questions, they should consult their doctor.

If the woman develops fever and rash, and shows other symptoms such as red eyes or joint pain, she should seek medical attention promptly. If she tests positive for Zika, she should practise safer sex or abstain from sexual intercourse for at least eight weeks after recovery, before trying to conceive.

If the man shows symptoms, he should seek medical attention promptly. If he is found to have the Zika virus, he should practise safer sex through the use of condoms or abstain from sexual intercourse for at least six months after recovery.