Adults will soon be able to get subsidies for vaccines recommended under the National Adult Immunisation Schedule, while disadvantaged groups will earn incentives when they join healthy living activities such as nutrition workshops.

These are some of the measures proposed yesterday by the HealthySG Taskforce, formed last November to promote healthier living. Many of the recommendations target lifestyle habits, such as piloting new smoking cessation programmes and co-funding showers and lockers at workplaces to encourage people to cycle or walk to work.

Another aim over the next two years is to increase the number of hawker stalls that offer at least two healthier options from the 3,500 or so now to around 3,900.

Other proposals leverage technology, such as using wearable devices to capture a person's biometric information and provide them with personalised health nudges, and creating a Lifelong Virtual Health Booklet to consolidate health data.

Most of the 11 recommendations will be implemented by next year.

The task force comprises the ministries of Health; Culture, Community and Youth; Transport; National Development; and Social and Family Development, as well as the Health Promotion Board (HPB), and Housing Board (HDB), among others.

"Our health outcomes are very good... but what we're looking at is to do what we do better and ensuring that certain disadvantaged groups are given the help they need," said Senior Parliamentary Secretary for Health Amrin Amin, who chairs the body. The task force engaged almost 300 Singaporeans aged 18 to 60 from diverse backgrounds, including professionals in public health, health technology and behavioural insights, to devise the recommendations.

The Ministry of Health (MOH) said introducing vaccine subsidies for adult Singaporeans and permanent residents is aimed at increasing low take-up rates and reducing the incidence of preventable diseases. 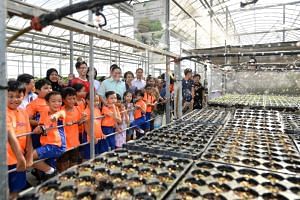 Tech initiatives to get people to improve lifestyle

The National Adult Immunisation Schedule was introduced in 2017 to help people from the age of 18 make more informed decisions about recommended vaccines, which are Medisave deductible. But flu and pneumococcal vaccines have take-up rates of only around 13 per cent for those aged 65 to 74.

Mr Amrin said the subsidies will be "substantial" and MOH is looking at making the vaccines available either at polyclinics only or polyclinics and Community Health Assist Scheme clinics. MOH will harness other initiatives such as public education to try to lift this to more than 50 per cent within five years from the roll-out of the subsidies.

The task force is also providing incentives for lower-income families to complete activities such as supermarket tours, healthier eating trails and cooking classes to get them to adopt healthy habits. Population surveys have shown that disadvantaged groups, such as lower-income families, generally smoke more, have higher body mass index, exercise less and eat more unhealthily.

Under the incentives programme, they will get HPB's Healthpoints, which can be used to redeem rewards such as supermarket vouchers, or free healthy grocery packs. It will be launched in the second quarter of next year, with the aim of reaching at least 15,000 residents, while expanding the topics to include smoking cessation, mental wellness and health screening.

The topic of healthy eating was the focus of another recommendation - incorporating a health component as part of the score in price-quality tenders for new eating houses leased from the HDB. It has awarded 10 tenders so far and will tender 30 more in the next five years.

The task force will publish a report detailing its recommendations at the end of the year.