It promised to give users "white, fluffy, glowing skin" and claimed that it was made from "100 per cent natural ingredients".

In fact, it contained mercury levels more than 40,000 times over permissible limits.

All five were tested and found to contain undeclared potent ingredients such as hydroquinone, a skin-lightening agent prohibited in over-the-counter skincare cosmetic products, as well as mercury, a toxic metal.

HSA warned that long-term exposure to high amounts of mercury could cause serious health risks, including damage to the kidneys, digestive and nervous systems. It said hydroquinone is a prescription-only medicine and should be used only under medical supervision. Inappropriate use could result in rashes, skin redness, tingling and burning of skin.

The three Deeja creams, which falsely claimed to be "made and specially formulated from 100 per cent natural ingredients", are part of the Deeja Cosmetic box set sold on local online platforms. 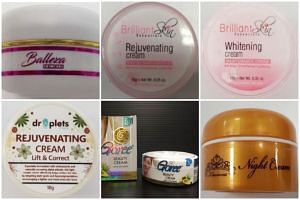 HSA said it has told administrators of online platforms which were selling the Deeja and RDL creams to remove the listings of all the affected products.

HSA advised users of the five products to stop doing so immediately and consult a doctor if they experience adverse effects. It said consumers should be wary of products that promise quick and miraculous effects or carry exaggerated claims as they may contain prohibited harmful ingredients. Consumers should also exercise caution when buying health products online.

Sellers and suppliers must stop selling these products immediately as they are illegal products. Those found guilty can be jailed for up to three years, fined up to $100,000, or both.

Anyone who has information on the sale and supply of these illegal products may contact HSA's Enforcement Branch on 6866-3485 during office hours on weekdays or e-mail hsa_is@hsa.gov.sg

To learn about the risks asso-ciated with buying health products, view this video produced by the HSA: youtu.be/dmjl_bSqJgA