SINGAPORE - A total of 380 new cases of human immunodeficiency virus (HIV) infections were reported among Singapore residents from January to October this year, the Ministry of Health (MOH) said in a media release on Tuesday (Dec 1).

The ministry urged individuals at risk of HIV infection to go for regular HIV testing as this can help an infected person be diagnosed at an earlier stage. 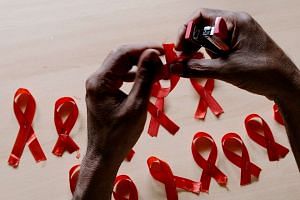 Out of the 144 cases, MOH found that about 39 per cent of them already had late-stage HIV infection when they were diagnosed. This is lower than 49 per cent last year.

With early diagnosis, an HIV-positive person can access care and treatment earlier, and receive counselling on how to protect their partners from infection, said MOH.

The ministry added: "With effective treatment, persons living with HIV can delay the onset of Acquired Immune Deficiency Syndrome (Aids) and continue to lead an active and productive life."

MOH said that the most effective way to prevent HIV infection is to remain faithful to one's spouse/partner and to avoid casual sex, and sex with sex workers.