Tougher action against home owners from March 14, to tackle dengue and Zika threats

With an expected spike in dengue cases this year and the threat of the Zika virus, enforcement will be stepped up against homes found to be breeding mosquitoes.

"We have to send this strong signal to everyone to do their part," said Environment and Water Resources Minister Masagos Zulkifli yesterday at the launch of an an- nual campaign to get people to eliminate mosquito breeding. 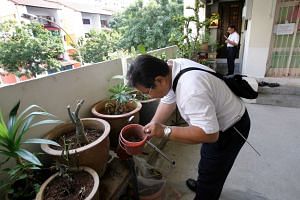 "The majority of the breeding places are still found in homes, the usual places again and again, and therefore we will be toughening our approach towards home owners."

Dengue cases this year could hit a high of 30,000 due to warmer weather, more mosquitoes and a change in the type of prevailing dengue virus, which would cause a spike in cases, said the National Environment Agency (NEA). This would be higher than the previous record of 22,170 cases in 2013, it said.

In January, the NEA has conducted more than 126,000 inspections islandwide, and found more than 1,900 cases of mosquito breeding. In the week ended Feb 20, 593 dengue cases were reported.

Adding to worries is the Zika virus, which is linked to under-developed brains in babies. It has been spreading across the Americas at an alarming rate, prompting the Ministry of Health to issue a statement last month on steps it would take if the virus entered Singapore.

Like dengue, the Zika virus is carried by the Aedes mosquito.

Yesterday, Mr Masagos, an MP for Tampines GRC, gave out brochures and mosquito sprays in Tampines as part of the launch of the "Do the mozzie wipeout" campaign in five districts. It was brought forward from its usual yearly launch around March to June.

Residents were urged to actively clear their homes of any mosquito breeding over a continuous 14-day period - equivalent to two breeding cycles of mosquitoes.

As part of efforts to step up public education, more than 5,000 grassroots leaders and People's Association Community Emergency and Response Team volunteers will be trained to conduct house visits.

This adds to the more than 5,800 grassroots leaders and volunteers already trained by the NEA.

Residents say they welcome the move to extend enforcement.

Tampines resident Tan Moh Lan, 65, said: "A lot of my neighbours have many flower pots lying along the corridors, and I'm not sure if they make the effort to check for mosquito breeding. We can't be the ones warning our neighbours, so it's good that the Government has stricter enforcement."

Mr Mickel Tan, one of the volunteers, is optimistic that such efforts are working. The 48-year-old said: "These days, residents seem more pre-emptive rather than reactive. They will share what they did to prevent mosquito breeding."