Post-Separation in August 1965, Mr Yusof Ishak's steadfast loyalty to Singapore convinced many other Malays to stay instead of migrating across the Causeway where they would be part of the majority community.

As this fledgling nation's first president, Mr Yusof, who was born in Malaysia, strived to build up people's faith in Singapore as a multiracial nation.

The man and his ideals are the focus of a new 120-page monograph titled Yusof Ishak: Singapore's First President by Iseas fellow Norshahril Saat.

"Had he left for Malaysia, like many other Malay elites at that time, many other Malays would have followed suit on seeing that their Yang di-Pertuan Negara no longer trusted the Singapore system," wrote Dr Norshahril. 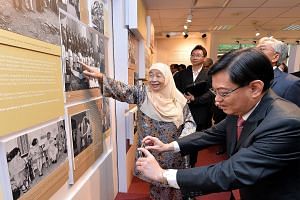 In the book, he also seeks to debunk the myth that Mr Yusof, who started Malay newspaper Utusan Melayu, was a "Malay chauvinist".

Dr Norshahril explained that Mr Yusof "was not struggling for Malays because he was a Malay". "He just wanted equality."

Former president S R Nathan, who wrote the foreward, said he suggested the book be written so that young Singaporeans could learn more about their country's history and its pioneers.

The monograph is not for sale as of now, but there are plans to distribute it to schools here.

Minister-in-charge of Muslim Affairs Yaacob Ibrahim, who was interviewed for the book, told reporters yesterday that it could help younger generations understand how pioneers like Mr Yusof struggled to build a nation.

Second Minister for Home Affairs and Foreign Affairs Masagos Zulkifli said Mr Yusof was "the first among many significant Malay leaders who conveyed the message that this country is a country that belongs to everyone".

A version of this article appeared in the print edition of The Straits Times on August 13, 2015, with the headline 'He chose to stay, thus convincing other Malays'. Subscribe
Topics:
More
Whatsapp Linkedin FB Messenger Telegram Reddit WeChat Pinterest Print Purchase Article Copy permalink