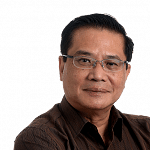 For about a year, Chinese newspaper journalist Xu Fugang, 56, went to Housing Board estates all over Singapore to capture how most people here live, work and play, usually on his days off or weekends.

The amateur photographer and Chinese daily Lianhe Zaobao executive sub-editor, who has been fascinated by life in Singapore's public housing estates since moving here nearly 20 years ago, did that from July 2014.

The result was more than 5,000 candid shots, showing residents of different races rushing to work or school, and children at creches or playgrounds. They also include shots of Malay weddings and funeral wakes at void decks, as well as night markets and sports and cultural activities.

From these, 800 colourful photos were compiled into a 500-page book titled The HDB Lifestyle In Singapore, which Mr Xu self-published as his contribution to Singapore's Golden Jubilee last year.

I know what living in the heartland is like, and I wish to show this unique Singaporean way of life to the world, especially through the lens of a new immigrant like myself.

"Singapore's success in public housing in the past 50 years is world-renowned, but I think how Singaporeans of different races, cultural backgrounds and religious beliefs live so harmoniously together is even more unique and that is what I want to show in my book," he said.

He stressed that the book is not just about buildings but also about Singaporeans, about 80 per cent of who live in HDB flats. "Nowhere in the world can you see people of different races living so well and comfortably together with all the amenities they need, such as schools, banks, shops, places of worship and even hospitals and clinics so nearby," he said.

"And there are also no racial and religious conflicts among them and security in the estates is generally good," he added.

But this is not obvious to visitors, as he discovered recently.

"A few years ago, a Chinese official told me he saw nothing special about Singapore after his short visit here, saying he saw only modern buildings, which there are plenty of back in China. Then I realised that he didn't see what I saw."

That gave him the idea for his book. "I know what living in the heartland is like and I wish to show this unique Singaporean way of life to the world, especially through the lens of a new immigrant like myself," he said.

Born in Sichuan, China, he graduated with degrees in political economy, from Sichuan, and business management, from Australia, and worked in the Middle East and Europe before moving here in 1997 as regional manager of a China-based medical equipment firm.

In 2000, he joined Lianhe Zaobao as a business reporter and became a sub-editor in 2008. Also in 2000, he became a Singaporean and bought a four-room HDB flat in Ang Mo Kio for $250,000. He and his wife, a traditional Chinese medicine practitioner who runs a clinic in Ang Mo Kio, have been living in the flat since. They have a daughter.

Mr Xu has divided his book into seven sections, which takes into account the comfortable living environment Singaporeans enjoy; the multi-racial, cultural and religious activities they are involved in; the comprehensive amenities as well as the thoughtful way in which the estates are run; and the roles played by grassroots organisations and community groups.

"As I got up close to the estates during my photo shoots for the book, I noticed details, such as posters asking residents to talk softly after 10pm, and there were temporary, air-conditioned study rooms specially erected for students in the neighbourhood whenever an estate was going through upgrading and noise from the construction works became unbearable," said Mr Xu.

Lianhe Zaobao columnist and former associate editor Giam Meng Tuck said in the book's preface that HDB estates are not only unique to Singapore but are also the result of social engineering that one cannot find in any political textbook.

He praised Mr Xu's efforts to show the "unique living lifestyle in the public housing estates which all Singaporeans can identify with".

Mr Xu, who has published pictorial books on the 2008 Sichuan earthquake, said he is working on a book on Singapore's best- known photographer, the late Yip Cheong Fun, and hopes to get it out soon.

• The HDB Lifestyle In Singapore is available at Books Kinokuniya at Takashimaya Shopping Centre at $107, including GST.

A version of this article appeared in the print edition of The Straits Times on January 18, 2016, with the headline HDB living captured in picture book. Subscribe