Five months ago, housewife Gerrene Toh opened her home and heart to her first foster child, a 10-year-old with special needs.

Anne (not her real name), who has global developmental delay, would throw tantrums almost daily in the first two months she was at the family's Bartley home.

"She would get upset if something was not done her way, and this could be something minor, like if she did not get her favourite dish for dinner," said Madam Toh, 44.

At times, Anne would also refuse to follow routines, such as brushing her teeth or taking a shower.

And yet, though Madam Toh had had misgivings about taking a child who would need special attention, and some moments were indeed stressful, she has through the experience become a firm believer that "the rewards far outweigh the challenges". These days, Anne is a happy and talkative child who no longer has frequent meltdowns and, instead, loves giving hugs.

Her favourite activities include drawing, painting and going to the swimming pool with Madam Toh's own three children, aged nine to 16. 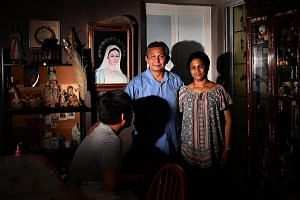 And when the family sits down together for dinner in the evenings, Anne would join in their conversations about their day, she added.

"She is not a stranger or an outsider. She has become a part of us and we don't treat her any differently," said Madam Toh.

No details can be given about Anne, but she is one of the luckier ones as older children and those with special needs still have a harder time finding foster parents, even as the Government works to grow the pool of foster families to 500 by 2020.

Teens are seen as having greater behavioural issues and emotional needs, said Ms Irene Loi, executive director of Boys' Town. "They are also perceived to be more challenging in terms of disciplinary issues and teenage angst," she noted.

In addition, caring for children with special needs may require specialised skills, which whittles down the pool of potential foster parents even further.

About 50 children at a time stay at the voluntary welfare organisation. This may include those with low intellectual ability, conduct disorder or attention deficit hyperactivity disorder. It does not take children with physical disabilities.

Boys' Town is also one of three agencies appointed by the Ministry of Social and Family Development (MSF) to support its fostering scheme. Children are placed on the scheme if they lack alternative kinship care arrangements for various reasons. Their parents could be unable to care for them through physical or mental illness, or they could be victims of neglect or abuse.

In 2014, the Government announced a target of placing two-thirds of vulnerable children in family-based care, rather than institutional settings.

As of May this year, about two-fifths of such children - or 430 - are now with foster parents. It is not known how many are older children above seven years or those with special needs, though the MSF has said before that the majority of children in foster care are below the age of seven.

MSF's director of children in care services Audrie Siew, in May, had called for more families to come on board, especially for older children, teenagers and children with special needs. Older foster children bring to the table their own lively personalities, compared with infants and toddlers, she added.

The MSF will launch its flagship Foster Care Week tomorrow at a roadshow at Punggol Waterway Point.

A version of this article appeared in the print edition of The Sunday Times on September 24, 2017, with the headline 'Harder for some kids to find foster care'. Subscribe
Topics:
More
Whatsapp Linkedin FB Messenger Telegram Reddit WeChat Pinterest Print Purchase Article Copy permalink