Singapore must guard against misinformation by mass media overseas that normalises drug use and continue to educate its young people, many of whom get drug-related information from overseas media sources, Law and Home Affairs Minister K. Shanmugam said yesterday.

One key challenge facing Singapore is the number of countries calling for alternative drug policies: Legalisation, decriminalisation and treating drug abuse as a health problem.

"There are very strong coordinated efforts internationally, as well as within Singapore, to change the Government's position on drugs, and to change public perception on drugs," Mr Shanmugam said.

He pointed out that those efforts are based not on science, but on ideology.

"Our position is based on practical realities, common sense and evidence," said the minister, who was speaking at the Central Narcotics Bureau's workplan seminar, where the agency showcased initiatives to help in its operations and outreach efforts.

Mr Shanmugam said countries were seeking to legalise and decriminalise cannabis use and to treat the issue as a health problem.

But scientific research has shown that the use of high-potency cannabis every day is linked to greater psychosis. Yet in the United States, public sector officials, researchers and non-governmental organisations (NGOs) that express misgivings about cannabis legalisation are characterised as being alarmist and backward. 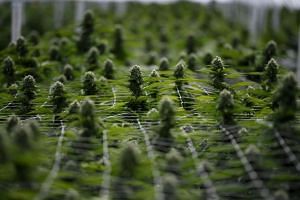 "Even though these are the very people - the enforcement agencies, the NGOs - which are the ones picking up the pieces and dealing with the consequences of the problems," the minister said.

He said it is important for Singaporeans to be aware of the context in which other countries make their policies. For instance, in the US and Canada, big pharmaceutical companies have poured in billions to promote medical and recreational cannabis.

The legalisation of cannabis has led to Big Pharma, tobacco and alcohol companies chasing "the new gold rush", as they want to reap big profits.

"In the US last year, in one year, investors poured US$10 billion (S$13.8 billion) into the legal cannabis industry," he said. He cited the example of cigarette brand Altria, the parent company of Marlboro, buying a 45 per cent stake in the Canada-based cannabis company, Cronos Group, for US$1.4 billion.

The money is also finding its way to lawmakers, Mr Shanmugam said.

"Unlike Singapore, over in the US, you can lobby, you can pay money to the legislators. The cannabis industry and those who stand to benefit from its legalisation contributed US$2.5 million to lobby revenues in 2018," he said. "This has meant that politicians become beholden to industry, and they are influenced by the companies that fund them," he said.

Cannabis is also framed as a "green gold" that the US should cash in on, instead of losing the revenue to Canada.

Mr Shanmugam said that the framing and shaping of public perception by the media also play a part in the misperception of cannabis use, with the consistent message being that cannabis is benign, and actually beneficial. He cited a US study which looked at The New York Times and found that after a sharp increase in the proportion of articles discussing the medical use of cannabis, the number of Americans supporting legalisation began to increase.

Mr Shanmugam stressed that the impact of social media and mass media overseas in spreading misinformation that normalises drug use cannot be underestimated.

Research showed that crime rates in Colorado rose faster than in other US states after marijuana was legalised.

In the face of such challenges from the global front, Mr Shanmugam said there has to be "preventive drug education, tough laws and effective enforcement and strategic international engagement".

A version of this article appeared in the print edition of The Straits Times on May 25, 2019, with the headline 'Guard against misinformation that cannabis is okay: Minister'. Subscribe
Topics:
More
Whatsapp Linkedin FB Messenger Telegram Reddit WeChat Pinterest Print Purchase Article Copy permalink