They have rallied to the Indonesian's side, helping her with meals, errands and her kids

In a five-room flat in Holland Drive, five-year-old Gerardin is playing with her mother's bracelets. Her sister Carolyn, who is almost two, has just woken up from a nap and is toddling around the house curiously.

Their mother, Mrs Suparmi Foo, 29, is chatting with her neighbours at the dining table. In family photos hung on walls and propped up on shelves, the three are seen with the girls' father and everyone is smiling.

But Mrs Foo's voice trails off when she talks about her husband Edward Foo, 65, and she breaks into tears. He, a Singaporean man, had died of colon cancer in July, after a six-month battle with the disease.

On top of coping with the loss of her spouse, Mrs Foo, an Indonesian, is also worried about her future with her Singaporean children here.

"If I can, I want to stay here with my children. But now, everything is expensive and difficult for me because I am not a permanent resident," she said, in a mix of English and Bahasa Indonesia. 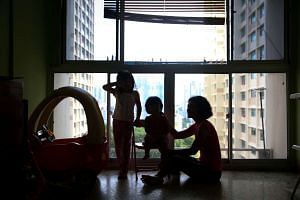 She belongs to a group of foreign spouses who are left vulnerable after the marriage breaks down, or when their husbands or wives die or leave them due to reasons such as abuse, or abandonment. Often, they do not have permanent residence in Singapore, and rely on their Singaporean partners or employers to apply for the relevant visit passes for them.

Mrs Foo, who is on a long-term visit pass (LTVP) which allows her to stay here for a year, speaks minimal English, is without a job, and gets by on savings her husband left her. While her situation is bleak, the silver lining has come in the form of neighbours who have rallied together to help her.

Mrs Joyce Cheong, 58, a housewife who lives in the same block, visits her at home almost daily and accompanies her on errands. Administrative staff Adeline Yeo, 56, teaches Mrs Foo to prepare simple meals, and helps her look out for second-hand household items.

When The Sunday Times visited Mrs Foo, Madam Yeo had just got her a small oven from another neighbour. Said Madam Yeo: "Suparmi is still young and has just lost a loved one. She used to be able to rely on her husband, but now he's gone. It's a very sad situation."

Mrs Cheong added: "We try to help where we can. We chat with her and give her moral support."

It is also thanks to the neighbours that Mrs Foo was able to be by her husband's side when he died in July.

The couple had been living separately with Mrs Foo and her younger child in Batam, and her husband and their older girl in Singapore.

She had worked as Mr Foo's domestic helper from 2007 to 2009, taking care of his diabetic mother, who died in 2014. Mr Foo's father died many years back. Mr Foo was a sailor but had been unemployed for many years before he died. He was helping to take care of his mother.

The duo married in 2010 in Indonesia. Mrs Foo was subsequently barred from entering Singapore as she had violated a condition of her work permit. Anyone who has been in Singapore on a work permit cannot marry a Singaporean or permanent resident without the approval of the Manpower Ministry (MOM).

Mr Foo's frequent trips to Batam with daughter Gerardin stopped when he became too ill to travel.

He learnt of his sickness, end-stage colon cancer, only in January this year. He broke the news to his wife over the phone. "I was so worried when he told me he had cancer. I wanted to come to Singapore but I couldn't," she said.

Mr Foo then asked his neighbours for help to get his wife over.

Mr Terry Shiau, 75, who learnt about Mr Foo's plight from other long-time residents, said: "He just wanted to be with his family in his last days. So I helped him write to the authorities."

After numerous e-mail exchanges with the MOM and Immigration and Checkpoints Authority, and with the help of their MP Chan Chun Sing, Mrs Foo came to Singapore in February. Her entry ban to Singapore was later lifted permanently, and she was granted the LTVP two weeks before her husband died.

Mr Shiau was at the ferry terminal at HarbourFront with fellow resident Thomas Choo, 69, to pick Mrs Foo up when she came over in February. By this time, Mr Foo was so weak that he had problems walking. But he was more cheerful with his wife and daughters by his side.

His next-door neighbour, 73-year-old Stewart Olivia Carole, who uses a wheelchair, also got her domestic helper Julita Castillo to prepare meals for him every day. Said Sister Olivia: "I told my helper to keep some food for Mr Foo. It's not much, I just do what I can."

With Mr Foo gone, so too was Mrs Foo's strongest source of support. While she had worked in Singapore for two years, she is unfamiliar with places outside her estate and has no understanding of schemes and policies here.

Said Mr Choo, who helps to pick Gerardin from pre-school sometimes: "When her children fall ill, she doesn't know that she can save money by taking them to the polyclinic. We all try to do what we can for her. If we can't do it, we try to find someone who can."

Mrs Cheong and Madam Yeo have been teaching Mrs Foo how to get to places on her own. They also take Gerardin out occasionally to malls and libraries to give Mrs Foo time to herself.

In Mrs Foo's home, handwritten labels - "bicycle", "bedroom", "table", "door" - were pasted around the flat, on items and pieces of furniture. Mrs Cheong had written them to teach the girls English.

Mrs Foo knows she is fortunate to have her neighbours by her side. "I really thank them," she said.

The neighbours are not sure if Mrs Foo will be able to stay on in Singapore when her pass eventually expires, but it is one step at a time for now. Said Mr Shiau: "We don't know what will happen after one year... But we've started helping her, and we can't just stop halfway."