SINGAPORE - In a fillip for the beleaguered construction industry, the Government - its biggest client - is bringing forward $700 million worth of public amenities projects to this year and next.

This is on top of another $700 million worth of contracts that it had announced during Budget in February.

They include projects such as the upgrading of community centres, sports centres and police posts.

The contracts are generally worth $100 million or less each - smaller-scale jobs that will benefit small and medium-sized enterprises (SMEs), said National Development Minister Lawrence Wong on Thursday (Sept 28).

Speaking at the Singapore Contractors Association Ltd (Scal)'s 80th anniversary dinner, he said that the Government is aware of the challenges before the construction sector.

It has suffered four consecutive quarters of contraction due to a drop in private-sector demand. This is even as it grapples with pressure to move away from the long-time model of relying on cheap foreign labour and to invest in costly technology instead. 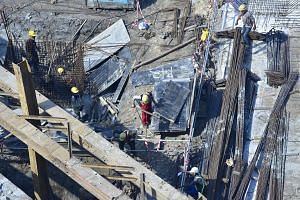 Said Mr Wong: "We hope that these projects will help the industry as a whole. We will continue to monitor the industry closely, and adjust the pace of public sector projects if necessary."

The Government has been spending more on infrastructure.

It expects to spend between $20 billion and $24 billion this year, up from last year's $15.9 billion. In all, the public sector would contribute about 70 per cent of the total construction demand in 2017.

But much of the funds go towards mega infrastructure projects such as the Jurong Region Line, Cross Island Line and Changi Airport Terminal 5 -which SMEs have said tend to be beyond their reach.

There are about 8,000 small and medium-sized contractors here, according to the Building and Construction Authority's (BCA) registry system.

On Thursday, Mr Wong also made three other announcements, including a change in the tender process for public sector building projects - such as new Housing Board flats - to better emphasise quality over price.

The price-quality tender system, used for projects worth more than $3 million, had in recent years come under the spotlight over concerns about cost-cutting and safety.

Currently, the price component takes up about 70 per cent in evaluating a tender. Non-price elements take up about 30 per cent.

But Mr Wong said the non-price percentage will be raised to 40 to 60 per cent come January 2018, with the government looking at a contractor's past performance, productivity and safety records to assess quality.

If successful, the revised criteria will also apply to civil engineering projects.

Another change is that the government will allow variations in the number of supervisors needed at a site, depending on the project's phase of construction.

Noting industry complaints that having a fixed number of supervisors stay throughout a project is costly and inefficient, Mr Wong said it is possible to reduce these requirements at the early and late stages of building without compromising safety. Firms dealing with larger projects will also be given the flexibility to swop out an engineer with two technical officers.

The move, to kick in later this year, will benefit about 180 of the 300 large-scale projects, and save the industry "several millions of dollars in compliance costs", the BCA said in a statement.

Finally, the BCA has set up a working committee to look at implementing the collaborative contracting model here, Mr Wong said.

The model, adopted in various forms in countries like Hong Kong and the United States, has all parties together to conceptualise the project from the start. This minimises errors, wastage and redesign problems.

The committee, which will also identify potential projects to pilot this model, is expected to complete its work by end-2019.

"We are keen to encourage this sort of collaboration, so we hope that you will work with us to make this work better for everyone," Mr Wong said.

Industry players have previously said that this method could also shorten building time.

For starters, SCAL will build a hub in the next three years, its president Kenneth Loo announced. Besides housing training facilities and being a venue to showcase new construction methods, the hub also aims to bring together other trade associations to improve collaboration, he said.