SINGAPORE -  Ensuring high-quality translations of Singapore’s four official languages is a statement of the nation’s commitment to multiracialism, but allowances must be made for honest errors, Communications and Information Minister S. Iswaran said on Sunday (March 24).

Mr Iswaran said on the sidelines of the annual Tamil Language Festival: “It is important for all Singaporeans to accord due importance when translating to different languages, as a mark of respect to the other communities that we live with and as a commitment to our multiracial identity.”

The festival, which opened at the Mediacorp Campus on Sunday and runs until April 28, celebrates Tamil through a range of literary, oratorical, arts and cultural programmes.

Its official opening comes in the wake of Tamil translation gaffes found in information fliers put up by a wet market operator last week.

The original fliers, which advised on the relocation of the wet market at Admiralty Place mall, were meant to be in Singapore’s four official languages – English, Malay, Chinese and Tamil – but Hindi was used instead of Tamil.

The wet market operator received more flak when he issued an apology letter that had another error. 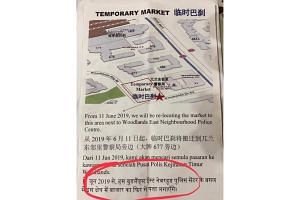 Mr Iswaran said the incident highlighted the importance of having a strong mutual understanding of religious and language sensitivities.

The market operator had the right intentions to translate the message to benefit seniors, but he went about it the wrong way by using Google Translate, the minister added.

“We do need to understand that from time to time, despite best efforts, errors may occur,” he said, adding that the operator has apologised and rectified the mistakes.

When it is an honest mistake, Singaporeans need to find the forbearance as a society to accept such lapses, said Mr Iswaran.

He added that the importance of ensuring accurate translations is why the Government has invested resources into training public servants and identifying organisations – such as the People’s Association – that can help achieve this.

People can also tap a database of around 11,000 terms translated into the four languages at gov.sg

Tamil Language Council chairman R. Rajaram said there are also many people in the Tamil-speaking community who are willing to help, adding that there is merit to pointing out these errors as a way to remind people to exercise care when translating languages.

But there is little benefit to harping on an honest mistake, he said, adding: “The people behind them have apologised. We should graciously accept their apology and move on.”