SINGAPORE - Giving.sg, the online giving platform run by the National Volunteer and Philanthropy Centre (NVPC), has hit the $150 million mark in charitable donations since its beginnings in 2010.

This milestone was reached just 18 months after it made news in December 2017 for raising more than $100 million.

This increase coincides with a series of improvements made to the platform since October 2017.

The improvements aim to provide a more seamless experience to users, such as letting individuals set up automated monthly donations and view personalised dashboards of their donation amounts and volunteer hours.

"It also shows that everyone can give and care for each other when it is simple, meaningful and fun."

The website matches donors and volunteers to charities, and currently supports 525 registered charities and 186,978 registered users, up from 491 and 129,332 respectively in 2017. 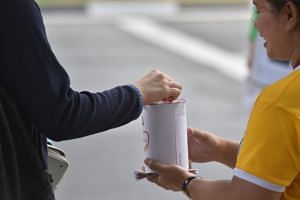 Pool of donations gets bigger, though other priorities stop some from contributing

Young, rich and generous: More millennials donating to their universities, some with large sums

Last year, 1,159 charity fund-raising campaigns were started on Giving.sg, up from 827 in 2017. Other crowdfunding sites also reported a rise in collections.

Giving.sg also allows partners to integrate its services into their own apps and websites.

The platform is looking at allowing users to donate groceries to needy families.

Mr Sim added: " We can embed opportunities to give back in everyday apps and websites, and offer partners a meaningful way to engage and delight their customers."