The move yesterday to come up with a pay structure with steady increments for cleaners is not entirely new.

Over the past few years, cleaners have seen their pay go up. As of June last year, they were earning a basic median salary of $1,100 a month, compared with about $800 just four years ago.

This was the result of a recommendation by a national committee of unionists, employers and civil servants in 2012 to set a minimum salary for local cleaners: Those cleaning offices will get at least $1,000 a month in basic pay and those cleaning hawker centres will get $1,200 a month.

A new law that kicked in from September last year also made it compulsory for cleaning companies to implement the minimum wages.

What is novel this time is that the national committee, having set the minimum salaries, is pushing for pay hikes for cleaners over the next six years. According to the committee's plan, a cleaner earning the floor of $1,000 a month will see his salary go up to $1,200 in 2019 and $1,312 in 2022. 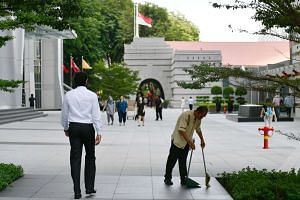 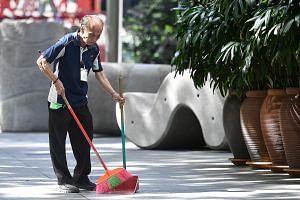 In an unprecedented move, the Government has accepted the plan. This is despite the fact that it goes against longstanding principles of linking pay hikes to productivity, and keeping the labour market flexible by having market forces set salaries.

What is novel this time is that the national committee, having set the minimum salaries, is pushing for pay hikes for cleaners over the next six years.

The one plausible explanation: The move is necessary to prevent cleaners' salaries from stagnating again.

For 10 long years, between 2001 and 2010, the wages of cleaners had been depressed. This was the decade which saw an influx of foreign workers doing low-wage jobs, which, in turn, depressed wages, and cleaners were particularly vulnerable as they were mostly older, less-educated workers who did not have many other job options.

While income figures for cleaners were not officially released, it is clear they earned well below the lowest quintile of workers. During that period, the nominal monthly income of the lowest quintile rose from $1,200 to $1,400. This increase worked out to real growth of only 0.3 per cent, almost flat, after adjusting for inflation.

The wage-hike plan can prevent a repeat of this wage depression.

What is also encouraging is that it has the backing of cleaning service buyers, including big names such as home-grown CapitaLand and City Developments, which were in the committee that drew up the plan.

One would have thought these property giants would resist the move, since raising cleaners' pay will increase their costs, but they did not. This is a welcome acknowledgement that padding profits by depressing the wages of local workers is not the way to go. While about 40,000 local cleaners are set to benefit from the pay hike, they will still earn considerably less than most workers in Singapore. The median monthly pay of local full-time workers, including employer contributions to the Central Provident Fund, was $4,056 in June.

But before one dismisses the pay hike as minuscule, it is necessary to look at other help the Government is giving low-wage workers.

For instance, those who qualify for Workfare will get larger and more frequent payouts starting from next year. The income ceiling for the Workfare Income Supplement scheme, which targets the lowest-earning 30 per cent of the citizen workforce, is also being raised from $1,900 a month to $2,000 from next month.

The extension of MediShield Life to cover pre-existing illnesses and the higher premium subsidies for low-income citizens will also help them with healthcare costs.

If the Government can keep a lid on inflation, cleaners and other low-wage workers will not see their earnings eroded by higher prices of daily necessities.

In a nutshell, the wage-hike plan for cleaners goes way further than the wage-hike recommendations the National Wages Council made in the past. The six-year timetable sends a clear signal to cleaners that the Government wants to increase their salaries in a sustainable way.

The move could even benefit other low-wage workers, since it will put pressure on two other low-wage sectors that hire locals - security and landscaping - to do the same.

These sectors have also implemented compulsory wage ladders, or what the labour movement calls the Progressive Wage Model. It remains to be seen whether they will get similar long-term wage-hike plans like the cleaning sector.

For cleaners, though, the move will definitely bring cheer, not just for this festive season but for six more years after that.