This year's Chingay carnival will be a bigger one, stretching over three days, and have attractions to draw the younger crowd.

The carnival was held for the first time last year to go with the annual Chingay Parade and it ran on the weekend after Chinese New Year.

This year, it will be held from Feb 15 to 17 in the open space behind the Singapore Flyer.

Highlights include a mini-karting circuit, family games such as a life-size version of Jenga, as well as art installations.

On Feb 17, the Formula One race track will transform into an adventure arena, where participants can tackle a series of 4m-high inflatable obstacle courses.

The carnival will run from 3pm to 10pm each day and admission is free. The Chingay Parade will be held on Feb 15 and 16, between 8pm and 9.30pm.

The People's Association, which organises the parade, collaborated with event management company Invade Industry on the programme. The company was behind Artbox Singapore, a creative market that saw a record-breaking 660,000 visitors over six days in 2017. 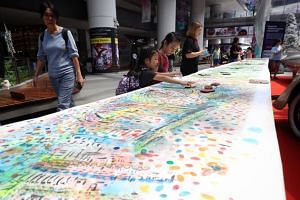 Invade Industry head of strategy Lee Haoming said yesterday: "Chingay has great content and excellent performers, but it's such a waste that a lot of the younger generation do not watch it or understand the art and creativity behind the parade."

One of the parade's highlights is the karting contingent from KF1 Karting Circuit. More than 30 go-karts will zip along a 270m route - or more than one-third of the procession route - at 100kmh. The contingent is made up of riders from 15 countries including Singapore, Thailand and Britain.

The karts will accompany a 24m-long float - the longest float at this year's parade - that will house a life-size replica of a Formula One car and 16 national athletes.

To mark the Singapore Bicentennial, the finale will showcase a 600-strong youth contingent who will don futuristic costumes and perform with props inspired by the screw-like structure of DNA.

The DNA motif will also dominate the finale float's design to symbolise the younger generation's commitment to building a future beyond 200 years, said Ms Jeanie Tan, chairman of Chingay 2019.

A version of this article appeared in the print edition of The Straits Times on January 25, 2019, with the headline 'Gear up for a bigger Chingay carnival'. Subscribe
Topics:
More
Whatsapp Linkedin FB Messenger Telegram Reddit WeChat Pinterest Print Purchase Article Copy permalink