He's lost more than $5m, half to jackpot machines, over 20 years due to addiction

But now, he is known as a "beggar" among his friends, after losing most of his fortune due to a gambling addiction spanning over 20 years, including at jackpot machines.

"I lost at least $5 million, and close to half of it went to jackpot machines," said Jerome (not his real name), 67, who now works as a taxi driver. "Now, I am a nobody."

Jackpot machines and the gamblers they attract have been in the spotlight of late, after media reports earlier this year showed how some S-League football clubs were relying on these machines for much of their revenue.

On July 20, the Ministry of Home Affairs announced a slew of measures - after a review initiated last year - to tackle problem gamblers like Jerome who punt heavily at jackpot machines.

From next May, gambling addicts like Jerome can bar themselves from jackpot rooms at all clubs here, which will be required to offer self-exclusion. Now, only 25 of about 82 clubs operating jackpot machines here have taken up the self-exclusion scheme, with around 1,500 self-exclusions as of May.

Jerome has plans to exclude himself from all jackpot machine rooms, and stop other forms of gambling such as betting on 4D.

Last Thursday, he took an exclusion order, barring himself from the casinos, after finding himself spending over five hours at the jackpot machines and losing some $150,000 since early last year.

Looking back, Jerome wishes he had sought help sooner for his gambling addiction that was fuelled by the big bucks he earned as a tour guide catering to Japanese tourists. He said guides like him in the late 1980s could earn up to $500,000 a year, thanks to generous tips.

After completing the tours around 3pm daily, tour guides would take a three-hour break before starting work again at 6pm. 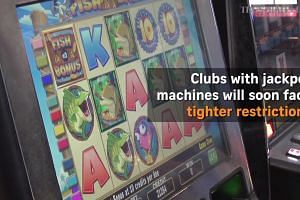 During this time, many would visit a club in the Dempsey area, close to Orchard Road where tourists stayed. "In three hours, we could lose thousands of dollars on jackpot machines," Jerome recalled.

There were no casinos then, but he would gamble at jackpot machines on a cruise ship off the Indonesian island of Batam as well.

It was on one such cruise that his wife got hooked on the jackpot, too. "We could spend days on the ship, because we lost money and did not want to come back before winning," said the 50-year-old housewife, who also declined to be identified.

The couple, who have a 19-year-old daughter, ended up borrowing money from friends, but eventually sought help at Blessed Grace Social Services - a non-profit group with addiction recovery services - at the start of this year.

Speaking to The Sunday Times at his four-room HDB flat in Ang Mo Kio, Jerome said he had sold two condominium units and a private house over the years to pay off his gambling debts. It has not been easy to kick his addiction.

"The feeling (of winning at the machines) was even better than taking delicacies like shark's fin and abalone," he added. "Especially when you strike a high payout on the machine - it's such a thrill."

His addiction has also made him ashamed to face his family, and he hopes that his experience would serve as a cautionary tale to others.

"I'm the black sheep of my family. Before my father died, I'd already lost the property that he gave me," said Jerome. "If I hadn't gambled, I would be comfortably retired now.

Jackpot gambling creates a unique set of problems for addicts, as they are hooked on the games and seem to be in a trance-like state when playing, said experts.

Some jackpot machine addicts may also find themselves skipping meals, and having an illusion of control over the machine.

About 14 per cent of gamblers seen by Nams engage in jackpot machine gambling, and nine out of 10 are men aged around 40 on average.

While the problem gambling rate dropped from 2.6 per cent in 2011 to 0.7 per cent in 2014, according to a gambling survey carried out every three years by the National Council on Problem Gambling, analysis from consultancy H2 Gambling Capital also found that gamblers in Singapore suffered the second-greatest losses per capita in the world last year, after Australia.

A report in The Economist on this data showed that gamblers here lost US$5.9 billion (S$8 billion) last year.

The general treatment for gamblers targets their distorted beliefs, aiming to modify them to more rational ones, said Mr Tan. For example, one of Nams' clients, a woman in her 50s, could not stop gambling on jackpot machines, and believed she could predict eventual outcomes by spotting patterns in the game.

Near-misses on the machine also egged her on, and she lost about $40,000 over three to four years.

Addiction specialist Thomas Lee said those addicted to jackpot machines are drawn to the visual and auditory stimulation, with exciting music and images on the screen.

"We need to address why a person is attracted to jackpot machines, find out what triggers a person to play on the machine, and do some cognitive challenges or therapy to identify the false beliefs that a jackpot player has," he said of treatment methods. "We need to challenge these thoughts, so the person may not be hooked as readily as before."

A version of this article appeared in the print edition of The Sunday Times on July 30, 2017, with the headline 'Gambler tells of fall from 'heavenly king' to 'a nobody''. Subscribe
Topics:
More
Whatsapp Linkedin FB Messenger Telegram Reddit WeChat Pinterest Print Purchase Article Copy permalink