Shoppers walking past the storefronts of home-grown bookstore Popular, known for its extensive selection of school assessment books, may be surprised to see smartphones, coffee machines and drones on display.

In a bid to keep up with changing consumer tastes and offer a comprehensive shopping experience amid a stagnating book market, Singapore's largest bookstore chain is customising its storefronts based on factors such as customer profile, locality and the size of the shop.

Two of its stores have undergone such a revamp this year as part of its continued strategy to diversify its product offerings.

Popular's outlet in The Clementi Mall reopened in October as its only store with gadgets and IT products, instead of books, displayed in the storefront. And its store in Jurong Point, which was overhauled in August, now has a focus on stationery, with offerings such as school and craft supplies.

It is part of a strategy that the firm has embarked on since the 1980s when it first ventured into the English book market, as it seeks to be a one-stop shop attracting a variety of shoppers, from families to bookworms to those looking for a second smartphone.

It first started to put together a comprehensive range of IT-related products two years ago - 91 years after it began as Cheng Hing Company located in South Bridge Road, selling Chinese novels and decorative posters.

Citing a Straits Times report of a study by consultancy Ernst & Young in April which found that people spend 12 hours on their gadgets daily, Popular's group chief executive and executive director Chou Cheng Ngok, 80, said: "For a brand that is built on serving the masses, this is an intriguing trend that we would like to get on board with."

We are experimenting. We want to see how many more new products we can bring in, we want to see how far this electronics-selling can be in the bookstore, and still stay relevant. You don't want the bookshop to be totally irrelevant.

Asked whether more Popular outlets could go this way in future, Mr Chou, who took over the business from his late father, founder Chou Sing Chu, said: "We are experimenting. We want to see how many more new products we can bring in, we want to see how far this electronics-selling can be in the bookstore, and still stay relevant. You don't want the bookshop to be totally irrelevant.

"Are future bookshops going to go the Clementi way? No, it's going to go in a very diversified way. We're just using Clementi to see - since we've got more than 6,000 sq ft there, we want to give 3,000 to 4,000 sq ft to electronics, and see how business would turn out."

The bookstore first started experimenting with different storefronts in 2015, when the outlet in IMM displayed assessment books, which is still the case today.

The Popular store in The Clementi Mall now sells items such as printers, audio accessories, laptops and small domestic appliances. 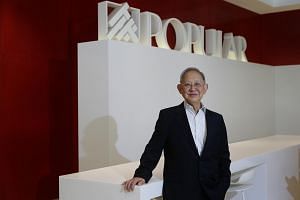 Popular CEO on a mission to sustain bookstores

There will also be a greater focus on selling gadgets at Popular's 11th BookFest this year, which will run from Dec 15 to 24. The attendance at the annual fair was about 600,000 last year, and a similar number of visitors is expected this year. The fair will be held at Suntec Singapore Convention & Exhibition Centre.

Popular has more than 180 outlets in Singapore, Hong Kong and Malaysia, with 29 stores here offering products in nine categories, including Malay books, textbooks and assessment books, stationery and tidbits.

Even as the firm continues to evolve alongside changes in technology and people's entertainment and reading habits, Mr Chou's vision for his firm is simple.

"My wish is to see it prosper and remain a home-grown label with a rich history - one that can proudly say it has grown along with our nation and our people," he said.