The authorities on lookout for misrepresentations, with some online campaigns raising up to six-figure sums

The authorities have made it clear that they will be keeping a close watch on social media and other platforms that facilitate donations, to prevent misrepresentation of claims or monies being used.

This comes at a time when individual appeals online - especially those with heart-rending circumstances presented through compelling narratives - have managed to garner six-figure sums in donations.

Recently, single mother Vivian Pan made an appeal on her Facebook page to raise money for another single mother, who was diagnosed with stage 2 cervical cancer. Ms Pan is now being investigated by both the Office of the Commissioner of Charities (COC) and the police.

Some netizens became suspicious of her fund-raising appeal after their offers of groceries were rejected, and the bank account given for cash donations was said to be hers instead of that of the cancer patient, Ms Tang Zhi Ling, 33.

The COC told The Straits Times that it received feedback about the case and is currently investigating the matter. Police said reports have been lodged and investigations are ongoing.

"We are encouraged to see concerned members of the public stepping up to help others with their time and resources," said a spokesman for the Ministry of Social and Family Development (MSF). 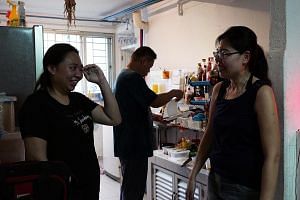 "However, we would also advise them to exercise due diligence and care in verifying the accuracy of reported accounts before committing significant resources, as there have been cases where reported accounts, including on social media, have not been complete or fully accurate."

The MSF said it has been providing "factual clarifications" on some reported cases of vulnerable persons on the MSF Singapore Facebook page or in response to media queries.

For instance, there was a crowdfunding campaign online to raise money for a 20-year-old who had to be the breadwinner for 13 family members.

When The New Paper reported on the family's plight last month, the MSF clarified that the family had been receiving its assistance for the past 51/2 years.

The family also gets cash assistance from ComCare, along with help for utilities and rental bills, though it still struggles.

This means fund-raisers need to fulfil certain obligations such as disclosing clear and accurate information to donors about the beneficiary and the purpose of the donation, the proper use of donations, as well as keeping proper records of donations received and disbursed.

The COC had previously issued restriction and prohibition orders to stop or limit fund-raising activities conducted by organisations and individuals because the activities were deemed improper.

Anyone who flouts the fund-raising laws can be fined up to $5,000 or jailed up to 12 months or both.