SINGAPORE - The latest dispute over family property to make it to court involves the surviving sons of the founder of Swee Kee, a famous chicken rice shop.

On Thursday (Jan 11), third son Moh Tai Sang lost his court fight against his two brothers for a share in the Katong family home that sold for $16 million in 2015.

He had claimed that a quarter of the sales proceeds should go to him, even though he had signed a document transferring his share of the house to his two brothers three decades ago.

To misquote Leo Tolstoy, each unhappy family feud is unhappy in its own way.

Here are some cases from The Straits Times archive:

PLAYERS: Eight daughters of the late Mr Loong Yoke Phin, who are minority shareholders of four companies, have sued their only brother and his four sons, as well as another sister. 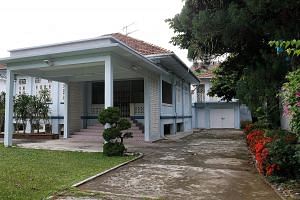 WHAT'S AT STAKE: The eight sisters want to cash out their stake either by selling their shares to the defendants at a price to be determined by independent valuers or by winding up the companies.

DISPUTE:  They allege that they were excluded from management of the companies and were denied dividends from the rental income of more than $5.4 million. The defendants say the firms, while family-owned, were never meant to be family-run.

PLAYERS: Mr Rajabali Jumabhoy, the patriarch of the Jumahboy clan, took his eldest son Ameerali to court in 1995.

WHAT'S AT STAKE: Shares in Scotts Holdings which the family controlled via Scotts Investments (Singapore)

DISPUTE: Mr Rajabali blamed his son for racking up losses of $50 million in the family business and dealing in family shares without permission. The court dispute divided the Jumabhoy siblings, with Ameerali and his brother Iqbal in one camp and his other brothers, Yusuf and Mustafa, and sister Perin, in the other.

RULING: The court battle ended only in May 1998, when the Appeals Court cleared Ameerali of any mismanagement of the business. The brothers decided to sell their shares in Scotts Holdings - whose crown jewel was Scotts Shopping Centre on Orchard Road. The site was originally the Jumabhoys' family home. The shares were bought by DBS Land, now part of CapitaLand.

DISPUTE: Unhappiness with Mr Alan Yeo began as he made some costly business moves in the late 1980s. When he wanted to bring in property and garment company Wing Tai as an investor, a group of family members opposed the sale and managed to block it. This rival faction also tried to oust Mr Alan Yeo as a director and chairman of the company. In May 1994, Mr Alan Yeo filed a court petition to dissolve the family holding company, Yeo Hiap Seng Holdings. This would give him a fighting chance of staying on.

RULING: The court ruled that the company be wound up and the rival Yeo faction agreed not to oust Mr Alan Yeo. This meant that Yeo Hiap Seng shares held by this holding company were distributed among many family members.

PLAYERS: Years later, brothers Charles and Henry Yeo went to court over family properties. They are the sons of Yeo Chee Kiat, who is the grandson of Yeo Hiap Seng founder Yeo Keng Lian.

DISPUTE: Madam Ng Lay Hua had willed a house each to the sons of her elder son Charles in 2002. She later cut the two grandchildren out completely and, instead, left the two houses to her younger son Henry, whom she also appointed as the sole executor.

Madam Ng, a Christian, had told family members that she was not leaving her grandson any inheritance as she was disappointed he had married a non-Christian and did not attend church regularly.

RULING: The High Court found in 2016 that Madam Ng had the necessary mental capacity to make her last will. The judge also noted that Madam Ng had instructed her lawyer to change the wills; and the will was not prepared on instructions by someone who stood to benefit.

WHAT'S AT STAKE: The fortune of shipping magnate and philanthropist Ng Teow Yhee, worth about $7 million.

DISPUTE: The elder Mr Ng died in 2001, leaving all his assets to his favourite son, Sebastian, who is one of eight children. It was reported that two of his other sons allegedly gambled heavily and a third had looked to Mr Ng Teow Yhee for financial help. Their mother often asked the father to bail them out. While the elder Mr Ng favoured Sebastian, he continued to provide for his wife and other children.

RULING: The court dismissed the claims in 2007, but this was overturned in 2009 after an appeal. The Court of Appeal decided that the words used in Mr Ng Teow Yhee's will were not clear in showing his intentions. At issue, among other things, were the words "on trust" which had appeared in a key clause in the will and had been capitalised and underlined. The Court of Appeal queried if this meant Mr Sebastian Ng was to hold the estate in trust for the rest of the family members.

DISPUTE: Trio want brother, who is the trustee of the house, to sell the 10-room property. They claimed it no longer generated enough rental income to justify holding on to it. The three siblings also wanted to use their share of the sale proceeds to fund their medical and living expenses.

RULING: Judge ruled in 2011 that the will clearly gave the brother the discretion to postpone the sale indefinitely and share the rental income among the siblings instead. The court of appeal overturned this in 2012 after the court noted that none of the siblings had lived in the house and the proceeds from the rental were "paltry". That went against the overall intention of the will, which was to provide for all the beneficiaries.

DISPUTE: Retiree hoped to get half of the proceeds from the sale of a house she co-owned with her daughter. Ms Neo paid $1.88 million for the three-storey house, and named her mother as co-owner so it would go to her mother in the event she died first.

Ms Neo invited her mother and sisters, who were living in a flat in Bishan, to move in with her - on the condition that they live in harmony.

But they began squabbling. Ms Neo moved out after her mother and sisters barged into her bedroom one night with six strangers to perform "religious rites to cleanse" the room. When she moved to sell the house, her mother - using her position as co-owner - blocked the sale.

RULING: Judge ruled in 2011 that the mother had no claim to any of the proceeds - the sum of nearly $1 million was to be handed over to her daughter.