Madam Halimah Yacob is Singapore's first woman Speaker of Parliament, and may well be its first woman president.

The potential rise to the highest office in the land would be a far cry from the humble beginnings of the 62-year-old.

Her father, a watchman, had died of a heart attack when she was eight, leaving her mother to raise her and her four older siblings.

Her mother initially sold nasi padang from a pushcart until she got a hawker stall licence.

Madam Halimah would then wake before sunrise to help her before going to school.

She attended Singapore Chinese Girls' School and Tanjong Katong Girls' School, and was the only one in her family to go on to university. 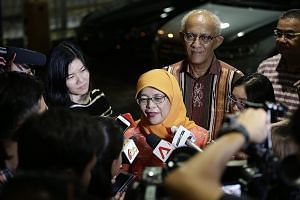 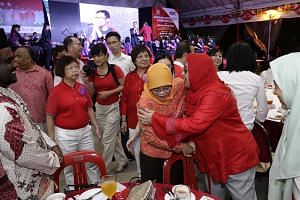 She graduated from the University of Singapore with a law degree in 1978, and started work as a legal officer at the National Trades Union Congress (NTUC), where she would stay for 33 years.

At NTUC, Madam Halimah rose to head its legal services unit and its women's development secretariat.

She also became the first Singaporean on the governing body of the International Labour Organisation, where she sat from 1999 to 2011.

In 2001, she earned her Master's in Law from the National University of Singapore. She entered politics in the same year and was elected an MP in Jurong GRC, where she was re-elected two more times - in 2006 and 2011.

In 2011, she stepped down from the post when she became an office-holder. She was appointed Minister of State in the then Ministry of Community Development, Youth and Sports from 2011 to 2012, after which she moved to the Ministry of Social and Family Development.

She stayed there till 2013, when she was appointed Speaker of Parliament at the age of 58, becoming the first woman to hold the post.

In interviews, Madam Halimah constantly credited her successes to the support she received from her husband, mother and family.

She called her mother her heroine, and the day her mother died was the saddest moment of her life. It happened on the morning of Polling Day during the 2015 General Election, when she was contesting Marsiling-Yew Tee GRC.

Despite her illustrious career, she is known for being down to earth and close to the ground.

She has also built a reputation for being an unstinting champion of workers, women and the poor.

In an interview with The Straits Times shortly after she was made Speaker, she said she had no plans to move out of her five-room Housing Board flat in Yishun, which held many precious memories. This was despite expectations that she would upgrade to private property.

She also said that living in the heartland gave her a keen sense of what bothered people and the daily frustrations they faced if their estate was not well taken care of.