Mr Kandulasri Ramesh had just one semester left of his MBA course in human resources when he decided to leave his native India and come to Singapore to work 12-hour days due to his family's tight financial situation.

He spends five or six days a week on his feet, toiling as a production operator for a plastics company - earning a mere $900 a month.

For the 34-year-old, who already has a degree in computer science, the arduous and backbreaking work represents a ticket to a better life.

"You could have a degree, but there would be no suitable jobs back home. A degree is not enough," added the Kakatiya University graduate from Telangana state. "That's why many come here for work. Here, we get more money."

Even with degrees, a graduate's starting pay back in Mr Ramesh's home state can be as low as $600, less than what he and other foreign workers earn in Singapore doing menial work.

Over the past two years that he has been in Singapore, Mr Ramesh, who lives and works in Woodlands, has come across many general workers and construction workers with degrees.

There are no official figures on the number of migrant degree-holders doing menial work here, but observers estimate it to be in the mid-hundreds to low thousands.

IN SEARCH OF HIGHER PAY

Unless the opportunities in their home nations become wider and they are able to utilise their degrees or master's (qualifications), many will continue to work in Singapore and other countries... because the pay is higher and stable.

A university education in some parts of India and Bangladesh where these workers are from can cost several thousands in Singapore dollars.

Hoping to get an edge over his peers, Mr Ramesh started a Master of Business Administration (MBA) course at Kakatiya University four years ago. But with a growing strain on his family's finances, he chose to come here to work in 2016, first in construction, then manufacturing.

Degrees not recognised by employers here

"The job involves a lot of standing. It was tough at the start, but I am now used to it," said Mr Ramesh, who still hopes to put his business expertise to good use in the human resources line.

He plans to work here for another five years, before returning home to finish his MBA.

An MBA carries "more weight" in job interviews, said the polite and soft-spoken Mr Ramesh. "In India, there are many who graduate with MBAs. It is easier to get good jobs."

He sends about 70 per cent of his monthly salary back home for his family, which comprises his grandmother, 80, mother, 55, and aunt, 48, all housewives. He also has a 38-year-old sister who now lives with her husband and two kids.

"Every day, I will call my mother for 10 to 15 minutes. We talk about her health, and whether she needs more money," said Mr Ramesh, who spends his free time serving at the Tamil Methodist Church, such as by conducting computer classes for other workers.

"I miss home. But when I see my financial situation, I have no choice but to stay and earn more money."

The main reason cited by observers for why many migrant workers with degrees are not hired in white-collar jobs here is the language barrier.

Another reason is that their degrees may not be recognised by employers in Singapore.

It also seems some employers do not care whether migrant workers have university qualifications.

Mr Hasan Mohammad Hasanuzzaman, who has a management degree, said: "They only care whether you can do the job or not."

With the promise of better pay, the 29-year-old from Bangladesh came here as a construction worker last May.

However, he sustained a back injury six months later after a floor hacking job saw him bending his back awkwardly. He is awaiting compensation.

"I am the eldest son. I have to take care of my family, so I came here to work," said Mr Hasan, who is married to a 20-year-old student in Bangladesh. His 50-year-old father is a farmer and his 43-year-old mother is a housewife. He has a brother, 24, who helps out at his father's farm.

About 80 per cent of his pay goes towards supporting his family.

"I haven't seen (my wife) for nearly a year, only through videos," said the affable Mr Hasan, who calls home daily. "When I talk to my wife, she will cry and sometimes I will cry. I tell her I have to work hard, so I have money to send home."

"I have a degree, but I also need the opportunity," Mr Hasan added. 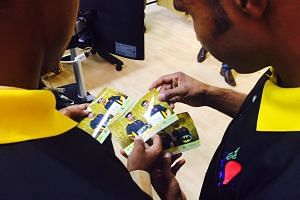 However, some migrant workers with degrees believe the critical thinking they gained in university has helped them to find solutions around issues faced at work.

One construction worker, who has worked here for three years, said he would spend his free time thinking of ways to lay bricks or transport frames in less time.

The 29-year-old from Bangladesh, who declined to be named and who has an agriculture degree, added: "We think of ways to help everyone do their jobs better."

Ms Nhaca Le Schulze, communications manager of migrant worker group HealthServe, said that it is "not rare to run into workers who have degrees", the bulk of whom are Bangladeshis in their 20s and 30s. Their qualifications can be in areas such as agriculture, engineering, history and literature.

"Unless the opportunities in their home nations become wider and they are able to utilise their degrees or master's (qualifications), many will continue to work in Singapore and other countries... because the pay is higher and stable."

Without migrant workers, "our economy would not be sustainable", he added. "On the other hand, I wish we could do more for them to use their degrees and certifications in careers where these degrees would be useful."

A version of this article appeared in the print edition of The Straits Times on April 02, 2018, with the headline 'From MBA in India to general work in S'pore'. Subscribe
Topics:
More
Whatsapp Linkedin FB Messenger Telegram Reddit WeChat Pinterest Print Purchase Article Copy permalink