In his speech yesterday wrapping up the Budget debate, Finance Minister Heng Swee Keat responded to concerns raised by 53 MPs over the past three days. He touched on what businesses and workers need to do, as well as social support measures and the need for a progressive yet sustainable tax system.

Govt can help but firms must take initiative

Companies are grappling with the slowing economy and mounting cost pressures, but there is only so much the Government can and should do to help, Finance Minister Heng Swee Keat said yesterday.

While the Budget contains some measures to help viable companies tide over the rough patch, Mr Heng said businesses must be able to compete by relying on productivity and innovation in the long run, instead of depending on low costs.

Over three days of debate, MPs had called for more help for small and medium-sized enterprises hit by the economic slowdown.

Get the right skills, match with right jobs 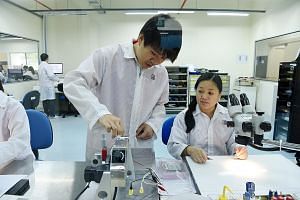 Nurture the spirit of enterprise

The key to tackling people's job worries in the current economic slowdown is to create the right jobs, arm workers with the right skills and then match them rightly, Finance Minister Heng Swee Keat said yesterday in Parliament.

This approach will also help Singaporeans get good jobs and stay employable, he added in his wrap-up speech of the Budget debate.

"I understand the anxieties of Singaporeans - it is not just jobs, it is about our families. We cannot take for granted there will be good jobs and incomes in the future," he said.

Support for young and old alike

In the first 18 months of a newborn's life, his parents can receive at least $15,000 for his care from the Government.

A retiree living in a three-room or larger Housing Board flat received on average $5,000 in state transfers last year, mostly in the form of healthcare subsidies.

These figures were given by Finance Minister Heng Swee Keat to illustrate the extent to which the young are given a good footing to achieve their potential and the elderly, to grow old gracefully.

The new $80,000 cap on the personal income tax relief that a Singaporean can claim has upset some working mums.

However, there is a good reason for it, Finance Minister Heng Swee Keat indicated in Parliament yesterday when rounding up the debate on the Budget for the new financial year.

He explained that to ensure Singapore's tax and spending system is sustainable, the entire regime has to be fair and progressive.