At the lowest point in her life, Madam Siti Nur Diana Kassimwould enter grocery stores and steal food by tearing open the packaging to feed her 14-month-old daughter.

Madam Diana, 26, said: "I went through a very difficult period in 2015. My husband and I were not working." They were also on public assistance.

But then Mr Nizar Mohamed Shariff, who founded the Free Food for All charity in 2014, heard about her plight from a friend. He sent her a bag of groceries as well as baby products for her newborn son. That a stranger would help surprised her.

Mr Nizar, 48, said that after nearly two decades in the shipping industry, he wanted to do something meaningful. "No one was distributing halal food every day back then. But a lot of Muslims required food assistance."

The charity organised its first meal distribution at a community centre in MacPherson in 2014 and has since given out more than 500,000 meals. Volunteers help to distribute the food packets at nearby multi-purpose halls. Besides receiving donations, the charity raises funds by selling food and other items to the public.

Mr Nizar, who is semi-retired, said though the charity targets Muslims, the food is for everyone who needs it.He contracts kitchens to prepare up to 100,000 meals a year for 3,000 elderly or low-income residents living in rental flats.

Over the years, the charity has also partnered Food Bank Singapore, RedMart and SG Food Rescue to deliver bread and groceries to the needy, who are identified by its network of volunteers. In all, Free Food for All delivers up to 12 tonnes of food and groceries every month. 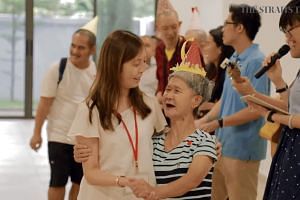 The charity empowers the communities that it reaches out to by enlisting the help of beneficiaries to distribute the food.

Madam Diana has since joined Free Food for All as a paid operational coordinator. Her husband works for the charity as a logistics coordinator and is paid per trip.

Although they still live in a rental flat, she said they are no longer on financial assistance. "I never thought a stranger would help me," she said, adding: "It changed my life."

Of his charity's philosophy, Mr Nizar said: "We started out by giving free food. When we empower them to be contributing members of the community, it will strengthen our society."

•For more information, visit the charity's website at https://freefood.org.sg

A version of this article appeared in the print edition of The Straits Times on December 17, 2018, with the headline 'Free Food for All who need it'. Subscribe
Topics:
More
Whatsapp Linkedin FB Messenger Telegram Reddit WeChat Pinterest Print Purchase Article Copy permalink