SINGAPORE - Donning gas masks and grey chemical agent suits, Singapore Civil Defence Force (SCDF) officers ran into the bleachers at the Marina Bay Floating Platform just before 2am to evacuate "parade-goers" and "casualties" in the aftermath of a "chemical attack".

As the injured people were carried out of the venue in stretchers, the SCDF's Hazardous Materials (HazMat) team - wearing orange full-coverage suits - trooped in.

Their mission: to locate and dispose of a harmful chemical agent that had been hidden among rows of seats.

With the help of HazMat detectors, the team managed to zoom in on a bag which contained the harmful source and disposed of it in less than 10 minutes.

But this hive of activity, with flashes of red and blue lights in the early morning on July 31, was not part of the show performance at the coming National Day Parade (NDP), that will be hosted at the venue this year.

Instead, it was for the SCDF's operational exercise to prepare emergency personnel for contingencies, should they arise during the Aug 9 parade.

It was the first time in recent years that the SCDF gave the media an inside look into their preparations for such major events, like the NDP and Singapore's Formula One race.

Speaking to the media after the exercise, which ended around 3am, SCDF's director of operations, Assistant Commissioner (AC) Daniel Seet said that major exercises like this give officers the chance to familiarise themselves with the environment in the case of a real incident. 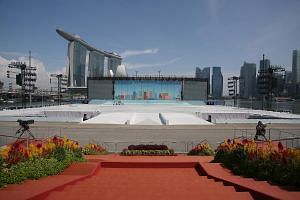 Road closures, extra security measures in and around Marina Bay on National Day 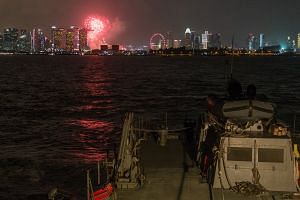 Sailing up to the increased security challenges of National Day

"These...exercises are very important for us to be able to help our guys to understand the terrain, walk through the terrain, and know the ground they are operating in."

He added that the exercise was a chance for personnel from the different agencies involved - the SCDF, Singapore Police Force, Singapore Armed Forces (SAF) and the Ministry of Health (MOH) - to work together and coordinate different segments of the contingency plan.

Just outside the floating platform, "casualties" were taken through the decontamination process during the operational exercise, where their clothes were removed and they were tended to at four SCDF Mass Decontamination Vehicles parked across three lanes along Raffles Avenue.

Once the injured victims were clean, they were taken to the first-aid point at the F1 Pit Building, where the SAF and MOH provided medical assistance to those who required it.

Three Battalion Casualty Stations can be deployed during the NDP to help treat injuries of varying degrees.

The stations have equipment such as blood pressure monitoring machines and ventilators.

There are ambulances on standby at the stations to take injured victims to hospitals. To prevent overcrowding, there is no fixed hospital that the casualties will be taken to.

The entire operation can be moved to another location should the need arise, such as when the F1 Pit Building is the target of an attack, said Mass Casualty Manager second in-charge, Military Expert 4 Melissa Lim.

Said the SCDF's AC Seet: "The entire chain is very important and no part of the chain can fail."

The exercise involved a total of 400 personnel and 55 vehicles from the four agencies. On Aug 9, there will be more than 500 people involved.

After the exercise, AC Seet said that there were areas to be improved on such as timing and the response by officers.

"We have noted down the lessons which we will use to tighten the entire thing," he said. "In terms of (the exercise) and overall experience on the ground, the guys were able to play out the plan that they had worked out, so I think it was successful."