SINGAPORE - One is a former American white supremacist recruiter who now helps people disengage from extremist ideologies, while the other is an Indonesian activist who works to rehabilitate radicalised fighters returning home.

But Mr Christian Picciolini and Dr Noor Huda Ismail see common ground in their work, winning first the hearts, and then the minds of those they try to help.

On Friday (June 21), both candidly shared their perspectives with fellow delegates of the International Conference on Cohesive Societies on why individuals join extremist movements, and the need to better understand their motivations.

"Extremism does not stem from ideology. Rather, it is social circumstances that drive individuals towards terrorism," deradicalisation advocate Noor Huda told The Straits Times in an interview after the session.

These circumstances could include poverty, conflict, broken families, isolation, and not finding meaning in their lives, he said.

He is the founder of the Institute for International Peace Building in Indonesia. His non-profit helps to reintegrate former terrorists into mainstream society by encouraging them to share their stories.

Mr Picciolini, founder of the US non-profit group Free Radicals Project, said there are similarities in the way he, and many others, turned to extremism.

He cited how a close friend from Belgium - whom he did not name - has "almost the exact story". This individual, who went to Syria, was a first-generation Belgian whose parents were from Morocco.

Mr Picciolini's parents, meanwhile, were from Italy and moved to the United States.

"Both of us felt very alienated from our communities... He came from a good family. He was looking for meaning, he was looking to find purpose, and somebody promised him paradise, just like I used to promise people paradise when I was a recruiter," said Mr Picciolini. 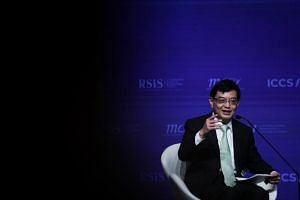 Dr Noor Huda noted that technology makes it easier to indoctrinate and recruit the disenfranchised. "Today when people cannot find something meaningful in their lives, they go online," he said.

"Previously, a person would have to physically be in a conflict zone to connect to those suffering. But now with social media, the conflict is right in your palm (on your phone) and it creates imagined solidarity," he said.

"These people become victims of ISIS lies perpetrated online. They are those who were swayed by ISIS narratives," he added. "No one is born a terrorist. You are not born wrapped in an ISIS cloth."

Dr Noor Huda is deeply passionate about his work. He could have gone down the extremist track. At 12, his parents, both civil servants in the Indonesian city of Solo, sent him to the hardline Al Mukmin Islamic boarding school founded by JI leader Abu Bakar Bashir.

He later became disillusioned by the school's teachings and quit.

In his late 20s, while working as a stringer for the Washington Post, he learnt that one of the perpetrators of the 2002 Bali bombing - which killed 202 people - was his boarding school roommate Mubarok.

In 2008, he started the Institute for International Peace Building and began recruiting former terrorists who were still in prison and wanted to start over. The organisation helps them find jobs and new communities once they are free.

"Most of them do not want to return," he said. "When they come to us, they want to restart their life. But often times, society does not give them a second chance."

He believes that ground-up collaboration is useful in reaching the potentially radicalised.

Mr Picciolini said: "Nobody is born to hate, nobody is born a terrorist. Even if you are born into a home where your parents are extremists, you still have to learn it.