The casket bearing Mr Nathan's body left the family residence at Ceylon Road at 8.45am.

About 100 people lined the road to bid Mr Nathan a final farewell as family and friends followed the hearse on foot until the end of Ceylon Road.

Among them were a group of children from Zee Juniors pre-school and their teachers.

Housewife Chan Li Yeon , 45, who lives next to the nearby Eurasian Association, said: "We all know he's a very respectable man, and since I live so near it's my duty to come and pay my respects and send him off."

Madam Chan said she was also at the Istana on Wednesday to pay her respects and will be going to Parliament House with her family in the afternoon.

"I'm feeling sad, it's natural, but I think he has served the country really well with grace and dignity, so he deserves this very regal send-off."

Mr Nathan died on Monday at age 92 after suffering a stroke.

People can pay their last respects to Mr Nathan at Parliament House on Thursday from 10am to 10pm.

A queue started to form at the Parliament House as early as 7.30am.

Service engineer S. Sathanatham, 48, was the first in line. He said he came early as he expected there would be a long queue.

"Mr Nathan was also part of the old guard who did a lot for this country," he said.

At around 9am, the hearse arrived at Parliament House.

The casket was received by Speaker of Parliament Halimah Yacob as a nine-man coffin bearer party transferred the casket into the building and onto the bier. 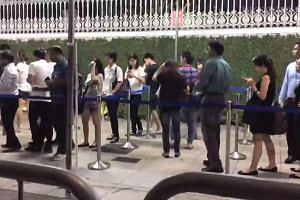 In the highest honour accorded to a leader, the state flag was draped over the casket, with the crescent and stars lying over the head and close to the heart of Mr Nathan, who was Singapore's sixth and longest-serving president.

A 700-strong group from the labour movement, led by labour chief and Minister in the Prime Minister's Office Chan Chun Sing, was among the early birds at the Parliament House.

Mr Hareenderpal Singh, 28, president of the Union of Security Employees, said: "Mr Nathan was also a union leader, and he united all the unions together. He was a very inspirational leader and we felt that paying our respects was the least we could do as a show of our solidarity as a union."

At 10am, President Tony Tan Keng Yam and his wife Mary Tan arrived to pay their respects.

"S R Nathan will be sorely missed by Singaporeans. His heart and commitment to Singapore is an inspiration," said Dr Tan.

Mr Nathan's body will lie in state ahead of the state funeral service on Friday afternoon.

Four uniformed officers will keep vigil over the casket in the highest form of respect to the deceased.

The funeral service will be held at the University Cultural Centre from 3pm to 5pm on Friday.

On Wednesday, a stream of national leaders, former colleagues and family friends paid their respects on the second day of the private wake held by Mr Nathan's family at his home.