SINGAPORE - Condolences have poured in for the late Lee Khoon Choy, a former politician, diplomat and artist, who died last Saturday (Feb 27) at age 92.

Among those who paid their respects at Mount Vernon Sanctuary were President Tony Tan Keng Yam and his wife, who arrived around 9pm on Monday (Feb 29).

As an ambassador to Indonesia in the 1970s, Mr Lee helped to diffuse the tension between Singapore and Indonesia, after Konfrontasi, a period of hostility between the two nations in the late 1960s.

His diplomacy "laid the foundation for friendship between Mr Lee Kuan Yew and (former Indonesian president) Suharto. And that relationship continues till today", said Mr Tan.

Mr Tan said he was struck by Mr Lee's many talents, not just political. 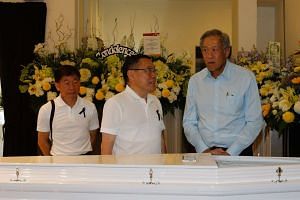 "He was an artist, a calligrapher, he played the violin and was always interested in new things and culture. Wherever he was posted, he made a serious attempt to know the culture of a country," said Mr Tan.

"His loss is a bit difficult to make up but he has made his contributions to Singapore, as a prominent member of the pioneer generation."

PM Lee did not speak to reporters but wrote a three-page condolence letter to Mr Lee's widow, Madam Eng Ah Siew, on Sunday.

Although it was sad to lose pioneer leaders like Mr Lee, Madam Halimah said she took comfort in the fact that Mr Lee had written several books about his various experiences, which could be shared with the young. 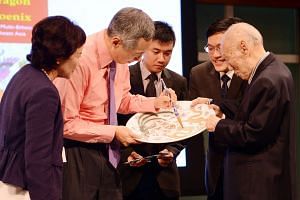 Mr Chan, who is also the statutory board’s deputy chairman, told The Straits Times that Mr Lee was instrumental in developing the community-building role that PA has today.

Among other things, Mr Lee had established day care centres in community centres, to help families look after their children while they worked, he said.

"Mr Lee served at a time when the greatest challenge was not just building flats, but also software for community bonding," said Mr Chan.

In a statement yesterday afternoon, the PA said that Mr Lee had challenged PA staff and grassroots volunteers to adapt to the demands posed by urban living and growing affluence, by offering leisure activities at community centres and opportunities for people to mingle regardless of race or social class.

Mr Lee also contributed to the labour union as a founding member of the Singapore National Union of Journalists, added Mr Chan, who is labour chief.

Mr Lee, a member of the People’s Action Party old guard, died of pneumonia at the National University of Hospital last Saturday.

Before he joined politics in 1959, Mr Lee was a journalist in the 1940s and 1950s who covered significant regional events.

As a politician, he served the various constituencies of Bukit Panjang, Hong Lim and Braddell Heights, before retiring in 1984.

Mr Lee leaves behind his second wife, seven children and 11 grandchildren. A service to celebrate his life will be held at Mount Vernon Sanctuary at 3pm on Wednesday, before leaving for Mandai Crematorium Hall 4 for cremation at 5pm.