SINGAPORE - Good politics and good policies must go together for Singapore's system to work, Prime Minister Lee Hsien Loong said at a dinner for senior civil servants on Tuesday (April 26).

"For the system to provide stable, consistent good outcomes for the long term, politics and policies have to fit closely together," he said at the annual Administrative Service Dinner and Promotion Ceremony.

"And if either politics or policies go wrong, the system may well malfunction."

In a 35-minute speech, he touched on the interdependence of politics and policies, the role of civil servants and the civil service, and how the system in Singapore has allowed the country to currently be "in a sweet spot".

Mr Lee also made the point that the civil service is not independent of the elected government, unlike the judiciary, which is a different branch of government. 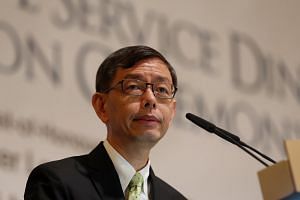 Civil servants not independent of elected Government, but they should be politically impartial: PM Lee

The civil service must serve the elected government of the day. But, he added, civil servants should be politically impartial.

Speaking at the Shangri-La hotel, Mr Lee said that while many assume that ministers "live in the land of politics" and civil servants "in the land of policies", policy and politics cannot be separated so neatly.

That is because policies do not exist in a vacuum. They start with a political objective, and in Singapore, that refers to the aspirations of the people.

Political parties reflect these aspirations and put forward their programmes during elections, he said.

Voters elect the party which best meets their aspirations. The party forms the Government and produces the political leadership, which sets the overall direction for the country and works with the civil service to design polices and implement them, he said.

This means that policies are ultimately derived from the mandate of the elected Government, and are based on its political goals and programmes, he noted.

Singapore, he said, has created a good civil service which is one of high quality, clean, effective and efficient, properly rewarded and paid, focused on producing good policies. This, he said, is not a given and deciding to have such a civil service is in itself a political decision.

If the politics is not right, in the long term, a good civil service "will itself be in jeopardy, despite safeguards" such as the Public Service Commission and the Elected Presidency, he said.

He cited European countries that are facing political crises and said that Singapore's system could also fail, even if people found this unimaginable.

"They imagine that with such a system in place, all we need to do is to hold elections," said PM Lee. Somebody will win the elections, and those who are elected will automatically be able to lead and run the country, and the civil service will always be there to make things work and there is no real need to worry about stabilisers, safeguards, or good government.

This, he said, is a "complacent and a mistaken view" because no system is fail-safe.

Singapore is also affected by globalisation and technology, and the lure of extremism and radicalisation is real.

"Our politics too can turn sour, or go wrong," he said. "Our policies may turn out to be ill-conceived, fail to win support even if they are theoretically correct, or simply be overwhelmed by events beyond our control ."

While all this hasn't happened to Singapore yet, it can do so and more quickly than most imagine.

Earlier, he lauded Permanent Secretary for National Development Benny Lim, who is retiring on April 30 after 37 years in the civil service. He also congratulated 65 officers who were promoted, and 21 who were appointed to the elite administrative service.