Since 2016, Mr Ang Kian Chuan has been hard at work growing vegetables such as kangkong, red spinach and pea sprouts.

Mr Ang, who has an intellectual disability, spends several hours a day tending to the crops in two greenhouses at the Movement for the Intellectually Disabled of Singapore (Minds) Idea-Employment Development Centre in Rosyth Road.

Mr Ang, 22, is one of 14 beneficiaries involved in farming activities at the centre. The farming project was piloted in 2016 with the help of the National Parks Board and the now-defunct Agri-Food and Veterinary Authority.

Yesterday, members of the public got to see the fruits - or rather, vegetables - of the beneficiaries' labour at the opening of a new farmers' market organised by Minds.

About 20kg of the produce was sold out within an hour of the event, which was attended by the beneficiaries' caregivers as well as residents in the neighbourhood. The proceeds, which amounted to about $300, were split among the beneficiaries as additional allowance.

It is hard work, but Mr Ang said he enjoys it. "I'll drink more water and put on a hat if it gets too hot," he added in Mandarin.

To help them complete the tasks, the beneficiaries are provided with special tools that allow them to easily create holes in the soil and keep track of the seeds they sow. 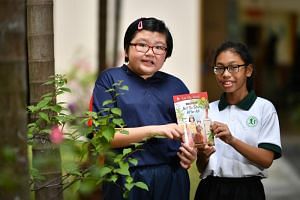 The farm produces enough vegetables per crop cycle for about three days' worth of meals for the 300 beneficiaries at the centre.

The plan is to hold the farmers' market more regularly when the construction of an additional greenhouse is completed by the year end.

This will double the number of beneficiaries involved in farming and increase crop yield, said Minds deputy chief executive Koh Gee May. She said: "We are encouraged that our beneficiaries have taken very well to this project and are enjoying the work. It is heartwarming to see their self-confidence and sense of responsibility grow."

Mr Ang's elder sister, Ms Ang Lay Tin, 26, a purchasing agent, said the project has been good for him. "His mood has improved. He has learnt to count money and how to take the bus. He's quite independent now."