Spotlight on club which donated $500,000 while the rest of sport survives largely on handouts

Campaigning in the upcoming Football Association of Singapore (FAS) election has been dominated by questions about a $500,000 donation to a regional footballing body made by Tiong Bahru Football Club, managed by Mr Bill Ng, one of the two contenders in the race.

Mr Ng has been in a war of words with FAS general secretary Winston Lee over who knew about the donation and what it was to be used for, but the debate has also turned the spotlight onto the amateur club and how it managed to come up with a sizeable donation, while the rest of the sport in Singapore survives largely on handouts.

A check by The Straits Times yesterday found that the side from the second-tier National Football League (NFL) had considerable financial muscle.

For the financial year that ended in March last year, the club’s gross income was reported to be $36.8 million, an amount which eclipses the FAS’ budget of $35.8 million for the same period. Going back to FY 2010/2011, the club notched annual income figures ranging from $11 million to $36 million. 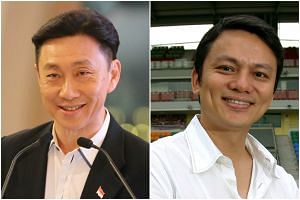 It's time to provide answers, not draw a line under FAS donation saga

Asked about the club's finances, Mr Ng said that approximately 80% to 85% is returned to the player, or paid to winners who play the jackpot machines.

"Normally, after payouts and taxes, the club only has about 7% of gross margins as surplus left for its operations costs."

He added that the club would like to offer its accounting records for inspection by any agency.

In comparison, Tampines Rovers from the top-tier S-League, a recognised local football powerhouse, had an income of $3.6 million in the FY 2013/2014.

Mr Ng is leading a slate called the Game Changers to contest the FAS election. The 57-year-old corporate rescue specialist is chairman of both Tiong Bahru and S-League side Hougang United. Facing him is a side called Team LKT led by lawyer and former FAS vice-president Lim Kia Tong. The election will be held at the Sports Hub next Saturday.

Although Tiong Bahru’s income numbers have not been made public before, Mr Ng has made no secret of its winning formula – jackpot machines. Tiong Bahru, which boasts almost 19,000 members, has a clubhouse in the basement of People’s Park Centre, where it has 29 jackpot machines. In previous interviews, Mr Ng has maintained that without the jackpot operations, the S-League would have folded long ago because depending on FAS subsidies was not the long-term solution.

He is similarly credited with turning struggling Hougang into a profitable side, with returns from its jackpot operations. The Cheetahs are the only S-League club that operate without the $800,000 annual subsidy from the Tote Board. In 2014, the club registered a profit in excess of $2 million, and they have set up a $1 million scholarship fund for young footballers.

News of Tiong Bahru’s incomes drew different reactions from sports officials. Mr Moklas Ma’arof, secretary of NFL Division 2 club Kembangan United, said: “I am very surprised by the figure. Most NFL clubs don’t even have $10,000 in their account and Tiong Bahru made more than $36 million.”

Another official, who is more familiar with jackpot operations, did not bat an eyelid. He said: “Tiong Bahru’s profits are not surprising because it has 29 jackpot machines, which is a huge number. I have seen people hanging out in jackpot rooms from morning to night and it is possible for the club to make such a huge amount in one year.”

Mr Ng issued a statement yesterday, in which he said the revelations over the last few days have been a “time to clear the air” for football in Singapore. While he acknowledged that friends have shared concerns that his team “has washed dirty linen in public, potentially even sullied (his) own reputation”, he insisted that “the public and football fraternity need to know the previous environment of administration... is... an unhealthy environment and needs to be cleared”.