For the first time in 20 years, Ms Jessica Gadingan, 23, was able to spend Mother's Day with her mother.

In 1997, Madam Jean Avila Gadingan, 45, hardened her heart and left her only child, then three years old, in the Philippines to move to Singapore to work as a domestic worker. Each month, the single mother scrimped and saved to send money back home to support the family and put Jessica through school.

Two decades later, her daughter has chosen to follow in her footsteps. Ms Gadingan quit her government job back home and arrived in Singapore two months ago to become a domestic helper.

"As long as I can be with my mother, it is okay even if I have to resign from my professional job to do domestic work," said Ms Gadingan, who was working as a documentation specialist - processing visa applications of foreigners who wished to work in the Philippines - for a year after she graduated with a degree in applied statistics.

"My mother has worked so hard as a maid to send me to university, so the sacrifice is worth it," she added. She said she tried applying for white-collar jobs in Singapore but was told that companies were not hiring.

Yesterday, they joined 400 other foreign domestic workers in celebrating Mother's Day at a clubhouse in Jalan Bukit Merah, organised by the Foreign Domestic Worker Association for Social Support and Training (Fast). 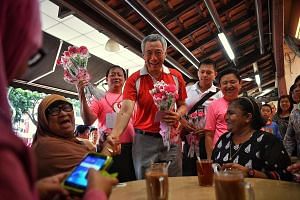 Flowers from PM to mark occasion

Ms Gadingan gave her mother a rose and hugged her. She received a kiss in return.

In previous years, the pair had to settle for simple Mother's Day wishes via text messages. But Ms Gadingan was always on her mother's mind. Her mother would video call her every day and send her gifts.

"She continues to send money back home in order for us to build a house in our village, so I am here to help her," said Ms Gadingan. She works for a family in Choa Chu Kang and her mother works for another family in Jurong East.

Madam Gadingan said: "It is sad she has to be a domestic worker, but I am 100 per cent happy to have her with me."

Fast executive director William Chew presented two mother-daughter pairs, who work here as domestic workers, with bags as gifts on stage yesterday. "By working together here, they can spend quality time and give comfort and support to each other," he said.

A version of this article appeared in the print edition of The Straits Times on May 15, 2017, with the headline 'First Mother's Day together in 20 years for duo'. Subscribe
Topics:
More
Whatsapp Linkedin FB Messenger Telegram Reddit WeChat Pinterest Print Purchase Article Copy permalink