No serious injuries and fire was quickly put out, but about 40 flights were delayed

A fire broke out at Changi Airport yesterday evening causing disruption on an unprecedented scale, in which an entire terminal was shut down for almost five hours and many flights delayed.

The fire, which was detected at Changi Airport Terminal 2 at about 5.40pm yesterday, was quickly put out, but its fallout stretched late into the night.

From that point on, until the all-clear hours later, all flights from T2 were redirected to T3.

Travellers who had already landed at T2 had to disembark onto the tarmac, before being ferried to T3. Those who had cleared immigration and entered the restricted area were also directed to wait on the tarmac.

The shops and eateries at the terminal were shut down as the bustling terminal was emptied of people. Those who had not checked in spilled onto the road outside T2 before being directed to T3, where they were given fresh departure gates.

In all, about 40 flights were affected, Changi Airport Group said just before midnight. In several cases, the delays stretched to three hours or beyond. 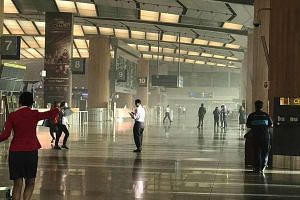 The fire had broken out in a room holding air-conditioning equipment at T2.

As the smoke started entering T2's departure hall, the fire alarm was activated, forcing the total evacuation of the terminal and flights to be grounded.

There were no serious injuries, but two airport staff were taken to hospital for observation and another four people received treatment at the T3 clinic.

At about 10pm, the Singapore Civil Defence Force gave the all-clear for T2, after which operations resumed progressively, with a number of arrival flights using the terminal.

Apologising for the inconvenience, the airport said it would do its "very best and work through the night to clear the backlog of delayed flights".

While the evacuation seemed to have been carried out fairly quickly and without much chaos, some travellers were upset with the lack of information about what they were supposed to do immediately after the terminal was shut down.

Others said they had to wait for two to three hours on the tarmac.

The Straits Times understands that this was partly because the airport had to first ascertain the scale of the fire and its impact, before it could decide on measures needed to mitigate the impact.

People on tarmac at Changi T2 after evacuation

Mr Shukor Yusof, aviation analyst at Endau Analytics, said that while shutting down an entire terminal over a minor fire may seem like an over-reaction to some, Changi Airport did the right thing.

He said: "In this day and age of heightened security alert, nothing is too small to neglect or downplay."

And especially so when an incident occurs at a major airport like Changi, which handles almost 60 million passengers a year, he said.

He added: "You can never be sure if a fire is just a fire, or whether there is a terrorist element as well."

A version of this article appeared in the print edition of The Straits Times on May 17, 2017, with the headline 'Fire causes Changi T2 to shut down for hours'. Subscribe
Topics:
More
Whatsapp Linkedin FB Messenger Telegram Reddit WeChat Pinterest Print Purchase Article Copy permalink