In a Facebook post after the rally, Mr Heng - who suffered a stroke in May - wrote: "He has been checking up on me in the last few weeks, advising me to take care after my stroke.

"My sincerest hope is that he will also be kind to himself when it comes to his health."

Mr Heng, who was following the rally closely, added that he had "never felt such a surge of joy" as when Mr Lee returned to the stage after taking ill in the midst of his English speech at around 9.20pm.

"I hope his full check-up after the NDR will find that everything is okay, and I hope PM will take some rest."

The rally was suspended for more than an hour as doctors checked on Mr Lee's condition, with the Prime Minister's Office clarifying in a statement that he had been feeling unsteady because of prolonged standing heat and dehydration.

Deputy Prime Minister Tharman Shanmugaratnam told reporters that Mr Lee has had a "tough schedule", but that he was feeling fine. 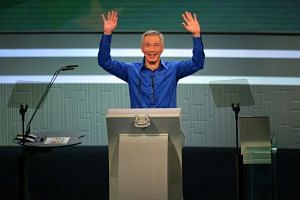 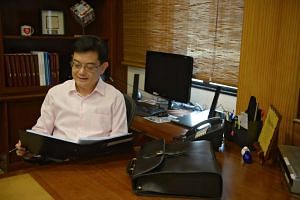 Mr Lee had started his rally at ITE College Central with his Malay speech at 6.40pm before moving on to his Mandarin speech 20 minutes later.

He took a short break before his English speech, which began at 8pm.

After resuming his speech at around 10.40pm, Mr Lee revealed that Mr Heng would be resuming his duties as Finance Minister and that a second minister - National Development Minister Lawrence Wong - will be appointed to assist Mr Heng at the Ministry of Finance (MOF).

Mr Heng will focus on next year's Budget and his ongoing work as co-chairman of the Committee on the Future Economy.

He added in his Facebook post that Mr Wong will be a "great member of the team". They had previously worked together during Mr Heng's time as Education Minister.

"We had good robust discussions, and I look forward to more exchanges when he joins us at MOF as Second Minister."

Mr Wong, who revealed in a Facebook post that Mr Lee will undergo a full check-up at the Singapore General Hospital, said he asked to help Mr Heng at the MOF in addition to his current role in the Ministry of National Development.

"I worked for several years in MOF previously as a civil servant and thoroughly enjoyed my stint there. Look forward to returning to the ministry, and giving my full support to Swee Keat as he progressively resumes his duties," he wrote.

Mr Heng also pointed out the closeness of Mr Lee's team, with some - Deputy Prime Minister Teo Chee Hean and Defence Minister Ng Eng Hen among them - seen rushing on stage to support him, while others informed the audience and viewers at home what was happening.

"I have experienced this spirit," he added, echoing Mr Lee's call for all Singaporeans to "step forward and play a role in nation building".

"All my best to PM and his family, who must have had a scare tonight. And my deep thanks to the SCDF team, not just for helping me after my stroke, but for the assistance they gave to PM tonight too! I for one know that PM was in good hands with them."

The same SCDF team who helped Mr Heng when he had a stroke in May also attended to PM Lee on Sunday night.