Though most Singaporeans are fascinated by science and believe it is needed to solve global problems, few are willing to embark on careers in the science, technology, engineering and mathematics (Stem) fields, the largest global science perception survey has found.

But 90 per cent of the 1,000 adult Singaporeans polled agreed that science is needed to solve the world's problems and wished they knew more about science.

Conducted by global science firm 3M, the second State of Science Index survey polled more than 14,000 people across 14 countries, including China, Germany and the United States, to find out how each nation views science.

The results were released on the firm's website last month.

In the survey, 55 per cent of Singaporeans agreed that curiosity is the most important quality a scientist should possess, compared with 45 per cent globally.

About a third of Singaporeans said they did not pursue a career in science because they thought they were not smart enough.

The issue of intelligence versus curiosity stirred a debate on Thursday at a panel discussion to review the study's findings.

The panellists comprised six experts from the science and arts scene and included Dr June Yap, director of curatorial, programmes and publications at the Singapore Art Museum, and Mr Anshul Sonak, regional director of innovation and education programmes (Asia) at Intel Corporation.

Mr Anshul said: "When we interview (potential employees), we ask how curious they are, rather than look at their intelligence in terms of grades or degrees or which university they are from. Stem is all about curiosity and asking new questions."

The study also found that parents - who comprised 345 of the 1,000 Singaporean respondents - play a major role in influencing their children's career paths. 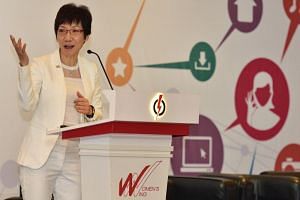 Why good science is great business for Singapore, Australia

More than a third of them confessed that they have said things to their children that could discourage them from pursuing Stem careers, such as "science or maths won't be important for your career in the long run".

Science Centre Board chief executive Lim Tit Meng told The Straits Times: "Parents are pragmatic. They look at the careers that can give their children more salary and prestige. They also tend to meet doctors, lawyers, businessmen and bankers, more than engineers and scientists. So, they don't fully understand what engineers do. So they would encourage their children to go into medicine or banking instead. This is how students with strong science background choose to go into business, banking or law instead at university."

Singaporeans are also more distrustful of science compared with the rest of the world, ranking 12th out of 14 when asked how sceptical they are of scientific discoveries. Almost half found it difficult to believe new discoveries because there are "too many conflicting opinions by scientists".

On this matter, Associate Professor Lim, who moderated the panel discussion, explained that, for example, although one research may show coffee is good for health and another might conclude that coffee is bad, both studies are valid because the studies were carried out under different conditions and theories.

"Both experiments were done under different contexts and under different conditions set by the researchers. So, we would expect different results for the same subject," he said. "There are grey areas in science. The nature of science is always pushing the boundaries and rejecting past hypotheses. But society expects black and white, standard answers. I think this mindset needs to change."

To make science easier to understand, scientists should explain concepts in a simple manner, said 92 per cent of Singaporean respondents, compared with 88 per cent globally.

Said another panellist, Dr Jeffrey Tung, 3M's head of research and development for Singapore and South-east Asia: "It doesn't matter how great an impact science has on everyday life, if we don't make it relatable to the man on the street. Scientists must come down from their ivory towers."

Over the years, Science Centre Singapore has been incorporating elements of arts and social sciences in its programmes to make science more digestible. In July this year, it will bring in a US-based musical troupe that will showcase through song and dance the life of Nobel Prize-winning scientist Marie Curie, and explain her breakthroughs in radioactivity and chemistry.