The compelling saga that is the love triangle of singer Faye Wong, actor Nicholas Tse and actress Cecilia Cheung keeps going even after nearly 20 years - if you think of it as a television show, that's many, many thousands of episodes.

So here's a recap of the story of Wong, 50, and Tse, 39, the May-December pair who have just rekindled their romance, and his former wife Cheung, 39.

March 2000: Wong and Tse's romance is budding, amid talk that they have been smitten by each other since they met at one of singer Anita Mui's parties. Although the two are seen kissing at a bar in Happy Valley, Hong Kong, they do not confirm their relationship.

June 2000: Wong and Tse go to a party at a pub in Causeway Bay to celebrate actor Tony Leung Chiu Wai's win at Cannes Film Festival. In a high-profile public debut as a couple, they leave the bar hand in hand, causing a stir among reporters who are waiting outside. Later, Tse openly declares that Wong is his woman and that he will marry her. He also helps take care of her daughter, Jingtong, from her first marriage to singer Dou Wei.

October 2001: Wong releases a self-titled record, which includes Vertigo, a song composed by Tse. The lyrics by Cantopop bard Lin Xi - about the fear of falling madly in love and being at the mercy of a lover who might leave - sound like Wong’s confession.

January 2002: Cheung is hurt in a car stunt for a TVB charity show. Tse, who made the movie Old Master Q 2001 with her, is one of the first to see her in hospital. But he says he thinks of her as a sister.

March 2002: Tse crashes his car and lets his driver take the rap. Cheung, not Wong, is the one who drives Tse away from the site of the accident. Hours later, he and Cheung go to Thailand.

April 2002: Tse is arrested at Cheung's home. Later, he says he has broken up with both women. 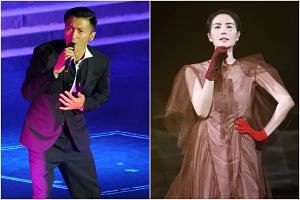 June 2003: Tse and Wong are seen holding hands in Beijing, but their romance soon withers.

August 2003: Wong celebrates her birthday in Shanghai, where she is making a movie, Leaving Me, Loving You, with actor Leon Lai. A new suitor of hers, actor Li Yapeng, flies to Shanghai for the celebration.

November 2003: Wong releases her last album, a record titled Jiang Ai (To Love). The title recalls that of Li’s television hit, Jiang Ai Qing Jin Xing Dao Di (Cherish Our Love Forever). The album includes MV, another song composed by Tse. The lyrics by Lin turn the song into a story about a woman moving on (“The song is ending, tonight has to continue”).

September 2006: Tse marries Cheung at Amanpulo Resort on a private island in the Philippines.

January 2008: Tse and Cheung's marriage appears to face a crisis, when actor Edison Chen's sexually explicit photos of her - as well as other women - emerge online in one of the biggest scandals in Hong Kong show business. But Tse stands by her and says they still have a good relationship.

August 2011: Tse and Cheung say they are ending their marriage and sharing custody of their sons, Lucas and Quintus.

October 2012: Tse opens up about his marriage and divorce on the TVB talk show Telling Maria, saying so much that the interview lasts three episodes. He is reticent, however, when he is asked about Wong. Haltingly, he says: "In the past, Faye and I...a lot of things...what's past is past. She now has a family. I can only talk about my stuff."

September 2013: Wong and Li say they have ended their marriage. He says he has custody of their daughter, Yan.

March 2014: Wong and Tse both happen to be in France, and Hong Kong newspapers get themselves into a tizzy hoping the newly single stars will meet again. Wong is attending Paris Fashion Week, while Tse is taping his travel show, Chef Nic, at her friend Vicki Zhao's Saint Emilion wine chateau. Ultimately, Wong stays away from the chateau. 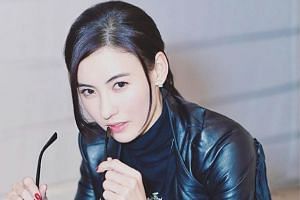 However, Zhao seems to tease Tse about his former girlfriend while taping the episode and a subsequent one in Beijing, where Zhao tells him "someone" is still in love with him.

September 2014: Wong and Tse are photographed and filmed at her apartment in the Chaoyang district in Beijing. They are seen doing housework, watching television and kissing.

December 2014: Wong and Tse are spotted in Hong Kong together. Wong was in Hong Kong to attend good friend and film star Carina Lau's lavish birthday party, in which Lau reportedly lamented that she could not invite Li or Tse to the party as Wong did not want her to do so.

April 2017: Wong and Tse, who are now openly in a relationship, although both keep a low profile, are rumoured to be in splitsville by Chinese entertainment commentator Song Zude. Tse openly refutes the claims and shows off a tattoo he got for Wong in a Facebook post.

July 2017: Wong and Tse are spotted on a plane by a netizen who says the two held hands the entire time. They have also been spotted in public several times prior holding hands and strolling.

December 2018: Cheung confirms the birth to her third child, another boy, without revealing the identity of the father. Rumours fly that Tse is the secret baby daddy, while other rumours circulate that Tse has ditched Wong for Chinese actress Yang Mi. In response, Tse releases a strongly worded statement against the "ridiculous rumours" in which he clarifies that he is still in "a stable relationship" said: "I am only the father of Lucas and Quintus."

October 2019: In response to Tse saying that he has loved Wong for 20 years, his elder son with Cheung, Lucas, called him out for being an absentee father and said: "He does not deserve (Cheung)."