SINGAPORE - Fathers play equally important roles as mothers in nurturing children throughout their lives, and by setting aside time to do so, will make more resilient families, said  Minister for Social and Family Development Tan Chuan-Jin on Thursday (Feb 16).

Mr Tan was chairing a dialogue "Fathers matter even more now", organised by The Centre for Fathering (CFF) at Northland Primary School as part of its Dads for Life movement.

It was attended by more than 200 fathers who have children from 55 mostly primary schools across Singapore.

Mr Tan said that even small gestures, like employers not scheduling important events on Children's Day so fathers can take leave to be with their kids, will go a long way, as "children won't need to go out and fill the void with something else".

"The best teachers are the parents, and the best school is at home...Nothing beats what we do at home," he added. 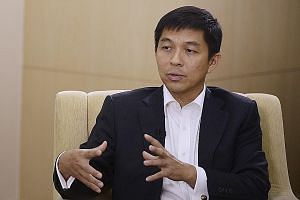 Yes, this minister does the ironing and windows at home too

CFF said fathers play an especially important role in fulfilling the developmental needs of their children during the primary school period.

By doing so, said CFF chief executive Bryan Tan, fathers could better prepare their children to find their own identity during their adolescent years.

In the last few years, the Dads for Life movement has been facilitating initiatives by schools where students' fathers organise activities to foster father-child bonding, such as camping trips and delivering meals to the elderly.

Among the initiatives CFF will roll out in 2017 is a mediation service that provides a non-litigious and less stressful option for resolving family disputes.