Father of boy, 16, who died after run in school says son 'had given lots of joy' to his family

Holding back his emotions, Pastor Davy Sim entertained visitors, shared precious memories and delivered a 20-minute sermon yesterday at the wake service for his 16-year- old son, Benjamin Sim Wen Ming, who died after a 2.4km run in school.

But when he was alone, Mr Sim, 55, struggled with the loss of the younger of his two sons.

He told The Straits Times: "It is difficult when we are alone, when we are home; that is when memories of him just come flooding.

Mr Sim said that he was Benjamin's "stress reliever", someone the teen enjoyed relaxing with.

The Secondary 4 student at Chong Boon Secondary School had collapsed just after completing a run during his physical education lesson on Tuesday morning. 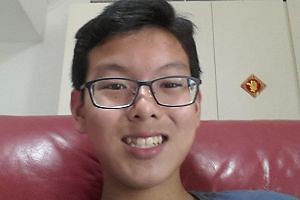 At the wake at the Singapore Bible Baptist Church yesterday night, Mr Sim, a pastor at the church, said that the family has to accept Benjamin's passing. He said his son "had given lots of joy" to his family. Benjamin's mother and brother were also present.

"This week has been overwhelming. Seeing my son in the casket, it is beyond words," he said. "But I thank God. It is not a tragedy. It is a blessing because he is now in a better place, he is in heaven."

Mr Sim described Benjamin as a sporty individual who was "a live wire". "He was always cheerful and jovial." He said that Benjamin had no history of any medical conditions.

More than 300 people, including church members, turned up at the church in Pasir Panjang Road.

His death left many of his peers devastated. A schoolmate, who declined to be named, said that Benjamin was a keen athlete and a hardworking student.

The Straits Times understands that Benjamin had keeled over and hit his head on the ground near the school foyer after finishing the run around the school in Ang Mo Kio.

The Singapore Civil Defence Force (SCDF) was alerted to the incident at 8.15am on Tuesday. A school staff member who reported the incident was already administering emergency resuscitation when the SCDF arrived at the scene.

Paramedics continued to administer cardiopulmonary resuscitation as Benjamin was being taken to Tan Tock Seng Hospital. He was later pronounced dead at the hospital.

Chong Boon Secondary principal Yeo Kuerk Heng earlier said the school was "deeply saddened" by his death. "Benjamin was well regarded and popular among his peers, and was especially known for his cheerful and friendly disposition."

The boy, who had been a volleyball player on the school team, was active in class. He was also good in English and would help his peers who were weaker in the subject.

Benjamin will be cremated tomorrow at Mandai Crematorium.