The mother of two young sons started work as a cashier at a supermarket near her Sengkang home in March as she wanted to help lighten her husband's load.

Last Friday, Ms Huang Luyang, 38, was going to U Stars Supermarket at Block 330, Anchorvale Street, to start her 3pm shift when she was fatally hit by an SBS Transit bus.

At her wake yesterday, her husband, Mr Ronald Low, 47, told The Straits Times he is worried about their two boys, aged one and four.

"I am not sure how I will be able to raise them without a mother, and how to love them well... A perfect, complete family, with everything planned ahead of us, is now suddenly shattered," said Mr Low, who manages projects at an air-conditioning company.

Yesterday, SBS Transit senior vice-president of corporate communications Tammy Tan said the bus driver has been suspended. The transport operator is helping the police in their investigations.

At the wake, Mr Low told ST he thought long and hard before having children as he was not young. The married couple of about 10 years had met through friends.

While he was initially against his wife taking up a job, he relented after seeing how keen she was to contribute financially, he added.

"We decided she would work nearby, so that she could still walk home to have dinner with us in the evenings," he said. "But her kind intentions have now done her in." 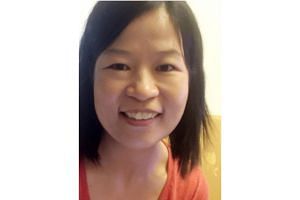 38-year-old woman hit by bus in Sengkang dies in hospital, leaves behind husband and 2 sons

Mr Low said that he regrets not waking his wife up before leaving home with their sons on the morning of her death. She had appeared tired from working till 11pm the night before and he wanted her to get more rest. He last spoke to her on Thursday night.

Choking back tears, he recalled how his older son told him on Sunday he wanted to draw something for his mother. "I asked him why, and he replied: 'Because Mummy loves me'," he said in Mandarin.

On top of the emotional struggle, there will be a strain on their finances, he said. "How do I function both as father and mother, and also work to support the family?"

Ms Huang's body was cremated at Mandai Crematorium yesterday evening. On Sunday, close to 100 people turned up at the wake to pay their respects, including neighbours, co-workers and several regular customers of the supermarket.

A colleague, 58, who wanted to be known only as Madam Goh, said Ms Huang was a friendly person who "never had a temper".

"She was always punctual for work and would greet all of us. That day, we were waiting for her and thought it was unusual that she was late. It was then we realised something serious must have happened," she added.