SINGAPORE - The British delegation on Feb 15, 1942, was a picture of dejection. The team, including interpreter Major Cyril Wild, had been sent to surrender to the invading Japanese forces at the Ford Factory in Bukit Timah.

Spotting the media filming the event, Major Wild, looking distressed and ashamed, chucked aside the white flag he had carried to the meeting.

This fleeting but poignant World War II moment is on show at the Battlebox museum at Fort Canning.

The footage is part of a new tour rolled out by the Singapore History Consultants aimed at giving visitors a deeper understanding of the frame of mind the defending forces were in, and the events that led to the largest military defeat of British and Commonwealth forces in Britain's military history.

The 1936 Battlebox bunker itself, which has undergone a year-long $300,000 makeover, was the site where British commanders gathered at 9.30am that morning to weigh their options.

It took all of 15 minutes to decide to surrender as they had been cornered by the Japanese across land, air and sea. 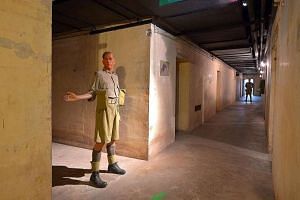 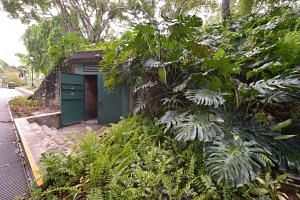 In Pictures: A look at the newly refurbished Battle Box bunker at Fort Canning

Mr Razeen Chan, the director of research and consultancy at Singapore History Consultants, said: "The Japanese had 600 superior airplanes compared to the British's 181 aircraft. The invading forces had pounded Singapore hard..."

The guided tours at the Battlebox, priced at $18 for adults and $9 for children, will take visitors through facts and figures such as the strength of the Japanese infantry, as well as the effort and money poured into the defence of Singapore.

The 9m-deep underground labyrinth was the nerve centre for military operations during WWII. It is slated to officially reopen on March 28.

The first round of works have addressed issues such as leaks. New generators and an air-conditioning system have been installed too.

The Singapore History Consultants' director Jeya Ayadurai said it is hoping for "government support" in rolling out additional improvements to the space.

This includes an additional $100,000 in funding to provide multimedia guides, and another $350,000 to fit the place with 3D and ambient technologies over the next two years.

Visitors can sign up for sneak previews of its tours from now till March 20.