SINGAPORE - It is "fairly obvious" whether Singapore should let the StanChart robbery suspect David James Roach go off scot-free or return to Singapore to face a trial, said Home Affairs and Law Minister K. Shanmugam.

Speaking to reporters on Thursday (Feb 22), he explained the reasons behind Singapore's assurance - first reported on Tuesday - to the British authorities that the Canadian national would not be caned even if he is convicted.

Mr Shanmugam said the Government had to decide which was the better option between the two, as the United Kingdom would not extradite the suspect unless Singapore gives an undertaking not to cane him.

"So you have a choice, you can either say okay, I will not do the undertaking, in which case, he will not be extradited, he will go off to lead his life in Canada or wherever else," said Mr Shanmugam.

He added: "Or we can say, we will give the undertaking not to cane but he will come to face all the other punishments, if he is convicted.

"So, I think we will have to decide which is the better option for us - let him go off scot-free, as it were, or get him back to face a trial. I think it's a fairly obvious answer."

Roach's extradition is being sought on one count of robbery under Section 392 of the Penal Code, which can carry a maximum of 10 years' jail and at least six strokes of the cane. 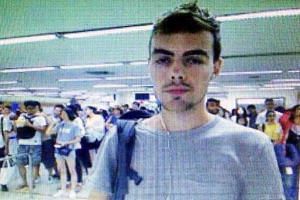 Holland Village bank robbery: Suspect was in Bangkok within six hours of crime

Roach is accused of robbing StanChart Bank's Holland Village branch of $30,000 on July 7, 2016. He allegedly handed a teller a note with demands. He then fled to Bangkok but was arrested three days later.

He was sentenced to 14 months' jail in Thailand last June for violating money laundering and customs laws. He had carried more than US$20,000 (S$26,000) - believed to be proceeds from the robbery - when he entered Thailand.

Roach was reportedly being deported from Bangkok to Canada and was in transit in London when he was arrested on Jan 11.

He also faces another count of money laundering under Section 47(1)(b) of the Corruption, Drug Trafficking and Other Serious Crimes (Confiscation of Benefits) Act. It carries a maximum sentence of a $500,000 fine or 10 years' jail.

Speaking to reporters during a visit to see new facilities at the Police Cantonment Complex to better help sex assault victims, Mr Shanmugam said the vast majority of people understand the facts of the case.

He added that there are certain punishments which different countries impose, which the extraditing country may not agree with or does not practise, such as the UK which has abolished corporal punishment.

"So, they will not extradite to a country which has corporal punishment," said Mr Shanmugam.

Legal experts say that in cases where caning is mandatory, such as robbery, the punishment can be avoided if the charge is amended to one that does not require such a sentence.

The Constitution also gives the President the power to remit part of the sentence – a provision that was used in the 1994 case of American teenager Michael Fay, who was caned for vandalising cars and public property.

His caning sentence was reduced from six to four strokes in consideration of a request from then United States President Bill Clinton.