A rare sea creature once thought to be globally extinct was rediscovered in Singapore waters in 2011, to the delight of scientists. It now seems to be thriving.

The first time the sponge made an appearance after its disappearance in 1908 was near St John's Island five years ago.

Scientists had discovered two sponges, but only one could be located by divers later because of murky waters and low visibility.

In 2014, another was found in a lagoon at the offshore Semakau landfill. It was later moved to the Sisters' Islands Marine Park.

MORE TO BE FOUND

The sponge has also recently been recorded in Australia and the Gulf of Thailand. I believe there are definitely more of them in our surrounding waters, such as the Malacca Strait and the Java Sea, waiting to be discovered.

Dr Karenne Tun, director of the coastal and marine division at NParks' National Biodiversity Centre, said: "As part of our species recovery programme, we wanted to move the one we found in 2011 to the one in Sisters' Islands, so we did a survey to make sure it was in good condition and that we could move it."

But during that dive last month, there was good visibility underwater and divers found the "lost" sponge from 2011.

"The better news is that because the visibility was good, we did a broader survey and found two more," said Dr Tun. "So currently in Singapore, we have five individuals that we know of - we know where they are and we can monitor them."

"Their discovery could be due to an increase in diver surveys, or (the sponges) could have grown from larvae from neighbouring waters which settled in Singapore," said Mr Lim. "The sponge has also recently been recorded in Australia and the Gulf of Thailand. I believe there are definitely more of them in our surrounding waters, such as the Malacca Strait and the Java Sea, waiting to be discovered." 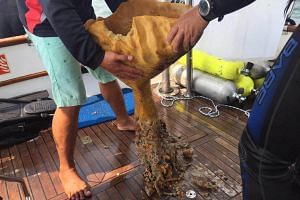 NParks out to conserve 46 local species

NParks is lending a hand to help the species recover after it was crippled because of overharvesting. Dr Tun said the next step is to see if the five sponges can be used as breeding stock to help repopulate Singapore's waters.

To do this, Dr Tun and her team went on a dive two weeks ago to relocate one of the St John's Island sponges to the Sisters' Islands Marine Park, about 5m away from the other one there.

Removing the sponge from its original location was not an easy task, as about half of its metre-long body was buried in the seabed. To remove it safely without parts of it breaking off, the team had to dig up the sand around it.

Mr Koh Kwan Siong, manager of the coastal and marine division at the National Biodiversity Centre, who was part of the team that helped to relocate the sponge, said that this stirred up the sediment and reduced visibility.

Dr Tun told The Sunday Times: "Now that they are closer to each other, there is better opportunity for them to reproduce through sexual reproduction, giving them a better chance to spread the eggs around Singapore waters."

Tropical Marine Science Institute's Mr Lim said that this strategy may help to increase the chances of reproduction.

However, he pointed out: "It is also important to find out its life history - such as when the sponges reach sexual maturity, when they release the eggs and sperm...

"Only after these studies are done can we propagate this iconic species effectively."

•Go underwater to see how the Neptune's cup sponge was moved on http://str.sg/4pZQ