Youth worker Kevin Chia did not have the easiest time growing up. His dad was in and out of jail, while his mother struggled to provide for him and his brother. When his father was diagnosed with cancer, Mr Chia quit school to work to repay the debts accumulated from the medical treatment. Yet, he was determined to live his life the best way he could, and is today helping other at-risk youth. This is his story in a series by The Straits Times about inspiring millennials.

As a child, youth worker Kevin Chia found himself shielding his mother from beatings from his father.

His father, who was involved with gangs and jailed repeatedly for drug offences, often returned home drunk and would beat up his wife over money. When Mr Chia tried to shield his mother, his father would hit him too.

"It was a very repetitive cycle… he would drink, do drugs, and then come back home and fight with mum," said Mr Chia, 33, who has a younger brother.

A nasty fight one night between his parents led a then 14-year-old Mr Chia to call the cops on his father, a former hotel chef.

His parents separated, and his mother obtained a restraining order against his father.

The turmoil at home led him to become "unmotivated in life", said Mr Chia. Although he did well academically, scoring above 240 for his Primary School Leaving Examination, he fell in with the wrong crowd, played truant and shoplifted.

But it changed when he started attending church on his own at 14, and found mentors there.

Given the adversity and difficulties in his life, he could have easily thrown in the towel and done something else... but he didn't.

MS YEO BEE LIAN, Trybe's assistant director, on Mr Kevin Chia's work with troubled youth and how he always goes the extra mile to help them.

It is possible to have a life of your own, and to live a life you can be proud of. Whatever you're faced with, there's always an option to do the right thing.

MR KEVIN CHIA, on the possibility for "problem kids" to reinvent themselves.

His mother, an accountant, rented a food stall at Tekka Market for his father to sell zi char, and for the first time in Mr Chia's memory, his father held down a stable job and could help with the family's finances, he said.

However, when Mr Chia turned 19, there was yet another twist in his life. His mother called him while he was at a church camp one day to tell him that his father was coughing up blood. They later found out that his father had late-stage lung cancer, and he ended up battling the disease for five years.

When his father died of the disease in 2010, it hit Mr Chia hard. "I was very devastated, by then I had grown to love him already... but I didn't know how to tell it to him," said Mr Chia, then a second-year economics student at the Singapore Institute of Management.

To make matters worse, Mr Chia found out his mother was struggling to cope with debt from his father's cancer treatment. His father's health insurance had lapsed while he was in jail.

Mr Chia decided to stop school to work to ease the burden on his mother. "It was very difficult for me to be the man of the household, which was the unspoken expectation… many times, I felt like I was deprived of being a normal teenager, but I just had to do it," said Mr Chia.

At the same time, the bachelor found himself driven to lead a meaningful life. "After dad's death, I tried to take life more seriously... I wanted to do something more."

He decided to dedicate himself to the social service sector, first working at a Christian organisation for youth, then another charity which helps the homeless.

Mr Chia now oversees juvenile delinquents at the Singapore Boys' Hostel as a youth worker with Trybe, an organisation that helps troubled youth.

Trybe's assistant director, Ms Yeo Bee Lian, said Mr Chia is a very passionate worker who is always willing to go the extra mile for young people and his colleagues.

She added that she particularly admires his resilience in life. "Given the adversity and difficulties in his life, he could have easily thrown in the towel and done something else... but he didn't," said Ms Yeo.

Today, Mr Chia said he sees himself in many of his young charges, who have just as complicated family backgrounds and histories.

"Our youth are just like me, I'm just lucky that I never got into any legal issues, I was never caught," said Mr Chia, who had got into fights in his late teens. 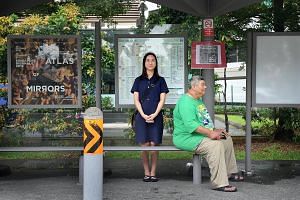 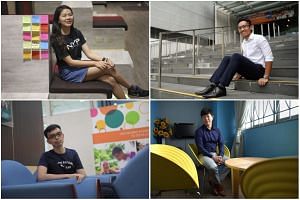 But the people around him never gave up hope on him, said Mr Chia, including his church's pastors who watched out for him.

Mr Chia noted many social workers too were concerned about him and his family. "We were hot property, everyone wanted to work on our case," he said jokingly.

Today, things are looking up for his family. Their debts have mostly been paid off now, and his mother and him live comfortably in a four-room housing board flat, said Mr Chia. His 30-year-old brother works as a chef in China.

"We laugh and say that when we eat at restaurants now, we can order without first looking at the prices," he added.

Mr Chia has gone back to school, and is doing a part-time bachelor's degree in social work at the Singapore University of Social Sciences.

He said his story shows that it is possible for "problem kids" to reinvent themselves. "It is possible to have a life of your own, and to live a life you can be proud of.

"Whatever you're faced with, there's always an option to do the right thing."

Know of a Singaporean aged 35 or below who has shown grit amid life's adversities? E-mail us at stnewsdesk@sph.com.sg