Some park the bicycles at home, while others even repaint them to ensure they have exclusive use

Shared bicycles are a common sight in many neighbourhoods these days, but some errant users have resorted to extreme methods to ensure these bikes are available solely for their personal use.

Photographs of bicycles chained up or stashed outside flats in high-rise buildings in Geylang and Farrer Park, for example, have been making their rounds online.

Some have even gone to the extent of repainting the bikes to mask the rental companies' distinctive livery.

The Straits Times found one such bike under an overhead bridge in Toa Payoh Park on Friday. The original yellow colour had been painted over in white and the company's lock had been replaced.

ofo Singapore, the Chinese company which owns that bicycle, said that it has experienced a "very low" rate of such cases. 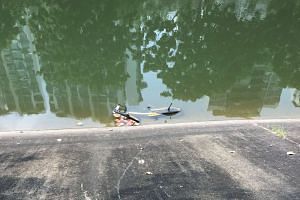 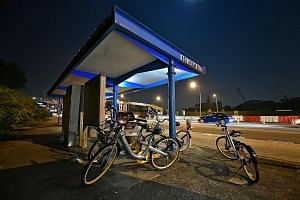 Its spokesman said that the company contacts errant users, who often apologise and say they were under the mistaken impression that they could hold on to a bicycle if they still had future travel planned.

Mr Elgin Ee, general manager of home-grown bicycle-sharing company oBike, said errant users who attempt to co-opt bikes for personal use make up less than 1 per cent of its user base.

He added that bicycles that end up locked with personal devices account for a few dozen in his company's fleet of several thousand.

The company's back-end system will flag those that do not appear to move for an extended time. "Users know that we have GPS (Global Positioning System) and their account details, so they will think twice before they do this," he said.

He added, however, that the difficulty is in pinpointing where some of these bicycles are as the GPS used by its app cannot indicate their specific locations within buildings.

One way that companies penalise errant users is to charge higher rental rates for those with a poor track record.

Mr Ee said that at the moment, oBike is managing such situations itself. "I don't think we have to report it to the authorities, unless people steal our bikes," he said.

Mobike said it has not encountered such problems, and added that its GPS and use of credit card as a payment mode act as a deterrent against misuse.

Lawyer Amolat Singh told The Straits Times that the legal situation is akin to that of supermarket trolleys which are removed from the store premises.

He said that misuse of shared bikes, depending on the user agreements with the companies, could constitute a breach of contract - but it might be hard to pursue the case as one of theft.

"From a criminal viewpoint, that is a bit dicey, because they are merely holding on to the bike," he said. And "normally, the police will say this is a commercial matter, you can go sort it out yourselves".

While the firms consider such abuse rare, the errant users' actions are causing frustration to others.

Mr Muhammad Imran Hassan, 37, a secondary school teacher, said: "They are inconsiderate and selfish, and no different from those who take supermarket trolleys home. They are depriving others of a service.

"I have used bicycle-sharing services in France and Germany before, where there was a sense that the bicycles were shared goods, and people who used the bikes took care of them."