If you notice pockets of your estate looking bare, you are not alone.

Over the past year, trees around the island have been cut down, as the authorities weed out those deemed unhealthy, or to clear the way for new developments.

One such area lies along Yishun Central Road, where stumps are all that remain of more than five stately trees that used to line a road divider.

In its effort to keep Singapore green but safe, the Republic's national gardener has to balance removing trees at risk of falling and harming people and property, with maintaining a verdant, shady environment. In the area near Yishun Central, for instance, the National Parks Board (NParks) said routine inspections had found that the trees were structurally weak. The large trees were felled last month.

Mr Oh Cheow Sheng, group director of streetscape at NParks, said: "These had to be replaced as they may pose a higher risk of failure, especially during the recent period of wet weather conditions.

"Based on site conditions, replacement saplings were inter-planted between the affected trees to mitigate the loss of greenery."

More trees will be planted in the area within the next two months.

Other areas that have experienced a tree makeover include Tanjong Pagar, near Keppel Road, and the road leading to Mount Faber.

In November, a plot covered with Albizia trees opposite the Bukit Batok Nature Park was also cleared over safety concerns. Albizia trees are vulnerable to storms and are more prone to falling because of their brittle wood structure and shallow roots. NParks is replanting the plot with native plants.

Last March, The Sunday Times reported that 10,000 to 13,000 trees in Singapore could be removed to make way for transport and housing projects over the next 15 years. The authorities assured the public that all the affected trees will be replaced with one or more trees.

While NParks did not give figures on the number of trees that have been removed over the years, it did note that it has been planting trees aggressively to ensure that greenery is not lost.

"Overall, we planted approximately 50,000 trees in 2017, which is more than double the number of trees planted in 2013," said Mr Oh. He added that decisions to replace trees are made in the interest of public safety after careful consideration and in view of their site conditions. Older trees are more prone to pests, diseases and structural problems.

"Trees to be replaced are transplanted to other sites, where possible, or else they are replaced with other trees," he said.

Marketing executive Sheree Lieu, 27, said some of the old trees at Yishun Central had large roots which protruded from the ground, causing some residents to trip. "Replacing them might be a good thing." 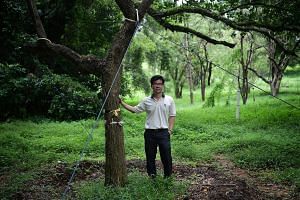 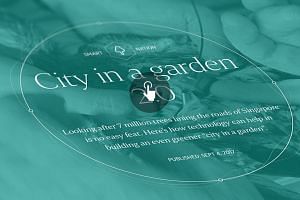 Incidents of fallen trees and branches at their lowest since 2001: NParks

Others, however, lamented the loss of their lofty neighbourhood sentinels which could have taken decades to grow.

Seeing numerous trees removed at one go in his estate has worried Mr Rikard Rosen, 54, who lives in Tanjong Pagar.

"While replanting is certainly being done, has anyone studied what impact removing old trees can have on our biodiversity?" he asked.

Mr Rosen, who runs a mobile technology company, said the younger trees do not provide as much shade, and removing the old trees means removing the different organisms, like insects, that live in them, which he worries will affect the surrounding ecosystem.

Dr Chong Kwek Yan, from the National University of Singapore's department of biological sciences, said large trees provide disproportionately more resources for animals, so removing mature trees to some extent will have an effect on the surroundings, though the impact will depend on the tree species.

Some resources are easily provided by other plants when the tree is removed, he noted. But old trees are particularly important for species such as woodpeckers, which excavate holes in decaying wood for nesting and these are subsequently used by other animals.

"However, these are precisely the trees that are the target of heavy pruning or even removal, because their weaker wood may pose a hazard especially in areas with high human activity. It's a difficult trade-off," he said.

It might take many years for a sapling to mature and reach a large size, with fast-growing species tending to have poorer quality wood which will pose problems when they are older. "Our streetscape managers therefore have an unenviable task of planning decades ahead to plant slower-growing saplings that will eventually replace others that will be removed in time."