SINGAPORE - A 15.5cm-long tooth from a sperm whale was found in a lagoon within the Sisters' Islands Marine Park on Nov 25, making it the second find related to the marine mammal in 2015.

In July 2015, the 9-tonne carcass of an adult female sperm whale was found floating off Jurong Island. Affectionally dubbed Jubi Lee, its skeleton is now being prepared and is set to go on display at the Lee Kong Chian Natural History Museum by the end of February 2016.

Museum scientists believe the latest discovery could have come from an adult male sperm whale.

"The size of the tooth suggests that it was from an animal much larger than the 10.6m female sperm whale that was found dead off Jurong Island," wrote museum officer Toh Chay Hoon and Mr Marcus Chua, the museum's curator of mammals and birds, in a paper published on Dec 4 in the Singapore Biodiversity Records.

The tooth, which weighs about 400g, is bigger and thicker than the ones found on the female, which were about the size of a person's finger, said Mr Chua. 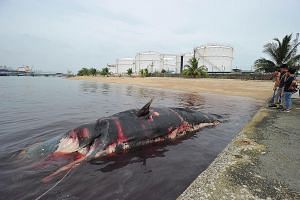 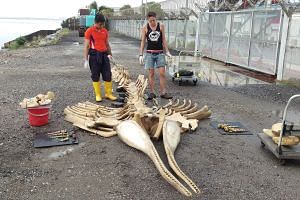 Sperm whale exhibit to be ready by end of February

Since sperm whales swallow their prey whole, their teeth are likely to be of limited use for feeding. Instead, male sperm whales have large teeth on their lower jaws that are thought to be for battling other males, Mr Chua said.

The tooth was found by Ms Toh while she was conducting an intertidal walk for the National Parks Board (NParks) in the lagoon .

Signs of weathering on it made it hard to determine how long the tooth had been exposed and how it came to Singapore.

The surface layers on the tooth seem to have been lost, Mr Chua said. "This could be due to mechanical abrasion or chemical reactions. We don't know how fast (these layers) go away, so we can't tell how long it's been out there," he told The Straits Times.

The available information is also not enough to determine how the tooth came to the lagoon.

A possibility is that Singapore is on the migratory route for these large marine mammals, which can grow up to 20m. Although female sperm whales and calves remain in tropical or subtropical waters all year long, males migrate to colder waters and head back towards the equator to breed.

The other possibility is that the tooth could have been transported to Singapore together with sand or other land reclamation materials.

Museum head Peter Ng said: "We plan to exhibit the pair together and showcase them to as many Singaporeans as possible - not just to teach them about these wonderful animals; but also to highlight the importance of marine conservation and the important work NParks and university researchers are doing."