With GE2020 warming the cockles of some hearts, we look at four species here known to harness sunlight to make their own food

The phrase "warmed the cockles of my heart" has been the subject of much amusement and intrigue since MP Jamus Lim used it to thank Sengkang GRC voters after they elected his Workers' Party team into Parliament in the recent general election.

Used to convey a sense of contentment and delight, it is actually a reference to the heart's ventricles, or Cochleae cordis, and not real-life, sun-loving cockles that can be found on Singapore's shores.

Among the cockles species here, four are known to make their own food, said marine biologist Neo Mei Lin, a research fellow at the Tropical Marine Science Institute at the National University of Singapore.

Photosynthetic algae living in their flesh harness sunlight streaming through the water to make food in a process known as photosynthesis.

There is a heart cockle (Corculum cardissa), but it has nothing to do with the phrase. It earned its name because of the shape of its shell.

He said in the post that the phrase reminded him of heart cockles that can be found in Singapore's waters. "Cockles can be pretty... and heart-warming too," he said.

Dr Neo, who studies giant clams, said: "Not many people may know that giant clams are actually overgrown cockles."

Cockles and giant clams are part of a broader group of organisms collectively known as bivalves - which are organisms with two shells that are joined by a hinge.

Generally, all bivalves are filter-feeders, said Dr Neo. That means they use gills to capture food floating in the water column.

But some bivalves have the added capability of supplementing their diet with nutrition produced by the photosynthetic algae in their folds.

For giant clams, the combination of photosymbiosis and filter feeding could be what allows them to reach great sizes up to 1.2m long.

As for the smaller heart cockle and relatives - which are usually just a few centimetres long - the reason for photosymbiosis is not well understood yet, said Dr Neo.

Seafood sellers also use the term cockle to refer to a number of small, edible bivalves, including the see hum, although these tend to be non-symbiotic species.

So why can some photosymbiotic cockles, such as the giant clam, grow to such large sizes, while others remain small?

Dr Neo said this is an area for further study. It could, for example, boil down to each species' physique - some could be better adapted than others to maximise light capture.

Giant clams, for one, have greatly enlarged mantles - the part of the organism where the algae reside, compared with their smaller cousins.

This feature helps to increase surface area for light capture.

Moreover, giant clams are often found sitting on the seabed with their valves open. This exposes the mantle to more light, further helping the organism soak up the sun's rays.

Generally, the ability of some bivalves to host photosynthetic algae is unique, because most other organisms that do so have exposed soft tissue and large surface areas that assist in light capture. These include reef-building hard coral, as well as some shell-less sea slugs.

"Yet, these hard-shelled bivalves are able to facilitate photosymbiosis, even though their bodies are not 'adapted' for the process," said Dr Neo.

Heart cockles have flattened translucent shells that increase the surface area for light capture. And even though they have slightly pigmented shells, which may prevent maximum light capture, they have other unique adaptations: window-like structures that are translucent.

Dr Neo said these tiny holes help to concentrate light so they can penetrate the shell to reach the tissue containing the photosynthetic algae.

"Coupled with the fact that these cockles have a thin shell and flattened body, these collectively enhance the light capture process." 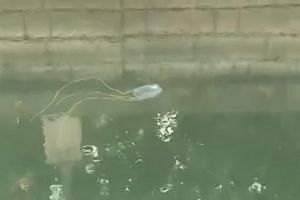 Box jellyfish sighting in Singapore: Facts about the beauty with a sting

Bivalves such as cockles and giant clams may not be as charismatic as some of Singapore's native marine creatures, such as sea turtles or dolphins. Yet, they play critical roles in the marine ecosystem.

For example, they are a food source for other species, including crabs and even seabirds.

And as filter feeders, they can help cleanse the water column, by filtering out nutrients and other larger particles.

In Singapore, these cockles can be found only on the seashores around the southern parts of the mainland, or along the Republic's offshore Southern Islands, said Dr Neo.

Cockles and giant clams are part of a broader group of organisms collectively known as bivalves - which are organisms with two shells that are joined by a hinge.